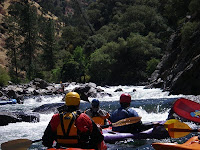 With my Channel Islands expedition coming up shortly it seemed like a good idea to do some more training.  But instead of heading out to the ocean in a long boat I figured trying to make a really short boat go long distances on flat water would make good training as well.  So I went down to the Tuolumne river outside Yosemite for the holiday weekend and spent three days on the river getting in some good training.  Paddling a six foot boat instead of the nineteen foot speedster I'll be picking up for the expedition was sure to give me a good work out. 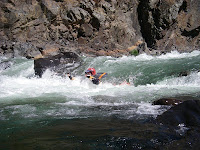 Truthfully, the weekend wasn't meant to be training but rather a great river trip to get in some whitewater kayaking with lots of old friends from southern California.  The main group (fourteen folks total) did two back to back one day trips down the main 'T': eighteen miles of class IV whitewater with plenty of slow stretches and a couple miles of paddling on the reservoir to finish off each day.  Many people take two (or three) days to run the river but by doing the whole rive each day we didn't have to carry any gear and we could take play boats instead of creek boats, making the river more fun and challenging.  But the trip was much more than just paddling - it was a chance to hang out with good friends in a low stress environment, enjoying not only the water but the scenery, the camping, the dinner in town and the experience as a whole.  It was pure fun.

The day before the masses arrived some of us decided to run the upper Tuolumne run (known commonly as Cherry Creek since that is where the run starts).  This is a class V affair and one of the most consistent and beautiful runs in the state, exceptional in that it has summer releases scheduled so it is still flowing in September when everything else is dried up.  Me and Alex had both down the river a couple times but not for years.  We lead a group of four first timers stepping up to their first real class V run.  It had the potential for epic disaster but everything went quite smoothly.  I had to scout more than expected since all the rapids had blurred together in my memory and I got beat down once when probing a hole, but otherwise it was an uneventful day in the best kind of way.  Going slow we ended up getting behind the release of water by the time we portaged around the last two big rapids but it didn't really bother us at that point.  But it would be nice to get back to Cherry a little more often so I could remember the lines and just have fun bombing the entire run.

Pictures HERE and video below: