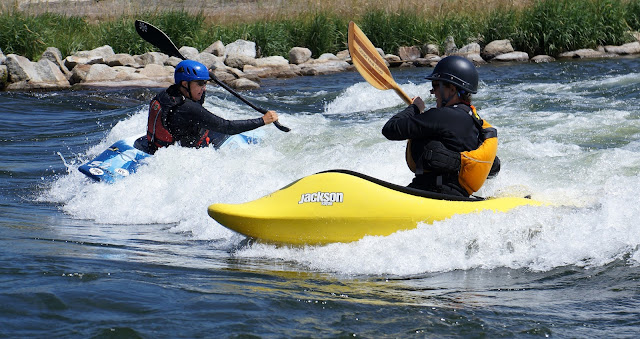 One thing that I really enjoy about whitewater kayaking is the exploration. I love going down a new river and finding out what's around the bend. Figuring out how to run a rapid, just drifting along and getting to place you can't reach in any other way. I don't playboat and I don't park 'n play. So on the surface of it, a whitewater park is the antithesis of why I kayak. It's about creating a specific place that stays the same, with features designed just for playing.

But I love whitewater parks! Not so much for me, but what they represent. They represent access. They are an easy way to get out on a river and have fun. They are often in urban environments and make a great way for people to see our sport. They are a great way to get introduced to the sport and offer some key aspects that help learning.

I was recently in Idaho at the tail end of a long roadtrip and got to do a little paddling. One of the highlights was a session at Kelly's Whitewater Park in Cascade. It was a great park with several features that made it the perfect spot to learn surfing and playing. There was a side channel with two beginner waves - perfect for first time surf lessons. There was a middle channel that had a more retentive wave that opened things up for playboaters - it also was great to learn sidesurfing. There was a bigger hole/wave that looked intimidating but was a great place to learn how to deal with bigger features and how to escape a hole. There was also an advanced wave for the skilled playboaters who wanted to push things.

That variety in one place is one of the special features of a play park. On the American river where I teach I know a great beginner wave that I try to incorporate into our 101 classes. There's also a bigger wave that we get to in our 201 classes but it's a little too much for people at that point. Upstream on the class III section there's a fast wave great for surfing long boats and a steep wave that's great for advanced paddlers. But these things are miles apart and on different runs. The play park lets you just get out and walk over to the next feature. You can do what you want and play as long as you want. That convenience allows learning to progress at a much faster pace.

Here in California we don't have any play parks. Our laws and regulations make it extremely difficult to get anything built, though we do have a couple projects that are in process. It's a shame because we have places that could really use them (L.A. and the S.F. Bay Area both have multiple areas where they would work). While I doubt I would ever be a regular user, I'd be happy to see more whitewater parks built for the joy and benefit they offer to others. If you love the sport of paddling then I think you should want them, too. 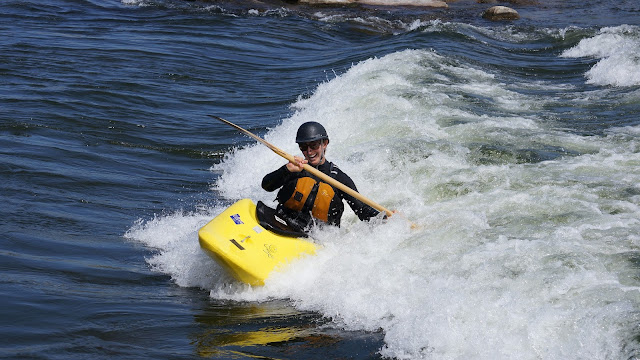 What is a vacation when you paddle for a living? When life's an adventure, how do you take time off? Well, thanks to the wonders of technology I am on vacation while this post is being loaded. I'm sure I'm having a good time, but I wanted to share a thought in my absence. Kayaking is not a vacation.

Kayaking is an activity. You can do it while on vacation. It can be the reason you go to your vacation destination. It can even be the focal point of all your time off. But time off from what? That's what makes a vacation. It's a break, stepping away from the everyday and doing something different. It's free from responsibilities and its purpose is enjoyment.

Kayaking can certainly fit into that description and I've taken many a kayaking vacations. This time I'm mostly going to be on terra firma (though maybe a couple rivers will get run). The important thing is that I'm stepping away from teaching, stepping away from looking after other people, and doing what I want.

People often say that it must be nice to have a job (teaching kayaking) that's like a vacation every day. They don't understand that learning to kayak is like a vacation but teaching is work. It's fun and rewarding, often in a beautiful place and definitely with good people. But it's still a job. And jobs require a vacation - a chance to recharge and get a new perspective. A chance to leave aside the ordinary (even if your ordinary is someone's extraordinary) and change things up. So that's why I'm on vacation. I look forward to coming back fresh and excited and with a world of changes for my future.