An all too common tale of beginner sea kayakers that got into trouble crossed my desk the other day. The particulars aren't important because it is all too common. Since some of my readers might be new to the sport, I thought I'd take a little time to analyze why people make errors in judgment. While this focuses on the beginner kayaker, I think there are lessons that apply to paddlers at all levels.

When people start something brand new, they are in a state called unconscious incompetence. That basically means they don't know what they don't know. In such a case, they will make decisions based on something other than their own judgment in the situation. That can be a problem but doesn't have to be.

If we lack the knowledge to make good decisions, the wisest course of action is to rely on someone who has the information. This is when people take an introductory class. They learn from a (hopefully) knowledgeable instructor. Or maybe they just go to their local kayak shop and ask questions about what to buy and where to paddle. Even a friend who's been kayaking for several years is a possible source of information. While not every source will be the best, the truth is that in the sport of kayaking most people are genuinely helpful and offer good advice. It's one of the great parts of the sport.

But people often don't want to ask others. They think they can figure it out. How hard can kayaking be, right? I'll just hop down to Walmart, pick out a boat, and I'm good to go. There's often a reluctance to appear incompetent or a desire to save money. Ironically, it's the effort to save things (face, money) that generally costs more (time, health, life). Spending a little money on the right equipment, listening to those who know more, learning some basics, all will make everything easier in the long run. And as I said, people in this sport are happy to help.

What I think is an even greater danger to beginner kayakers (and those not so beginner) is the faulty sense of experience. It's natural human behavior to believe that if things went well in the past they will go well in the future. The problem is that kayaking is a dynamic sport - the future is always different than the past, even when you don't expect it. Weather changes things, temperature changes things, equipment changes things. Most people get in trouble when something is not quite the same as what it was before. Even a small change can lead to huge difference in outcome. 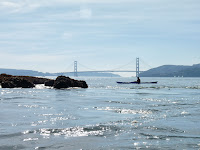 Let me give some specific examples of how this takes place and how we can mitigate it. Let's imagine we want to go paddling in San Francisco Bay. We've kayaked in Richardson Bay several times where the current is minimal. It's often sunny and warm. Maybe we even paddled over to Angel Island one time on a clear day without a problem. That makes us think we can do it again. So we set out on a bright summer day with all the confidence in the world. We get to the island and have lunch; it's so warm we take a nap on the beach. Eventually we decide to start back. But the tide is ebbing and there's a 3 knot current between us and where we launched. The afternoon winds have kicked up to a steady 25 knots. The water is rough and choppy and sailboats are flying in both directions. We start across and are quickly pulled into the roughest patch. Trying to avoid getting run over we turn sideways to the wave and our leaky sprayskirt quickly lets in lots of water. The boat becomes unstable and we end up in the 52 deg. water. The wind pushes the boat away from us faster than we can swim. If someone doesn't come along to help, we'll float all the way under the Golden Gate Bridge and towards the Farallon (where they do Great White Shark research). Not a good outcome.

Another common place that experience gives a false sense of security is the river. The idea that we made it through this rapid before so we can do it again. Change one little thing and everything can be different. Let's take a group of new kayakers. Maybe they're running the Gorge on the South Fork American River. It's a relatively easy class III that many people get to in their first year of boating. So they probably have done the run a couple times with a bunch of more experienced folks and all went well. Maybe a swim or two at the big rapids, but no problem. Now it's November. It's still fairly warm weather. They just did the class II stretch above it and the water is still releasing so they decide to just keep going. 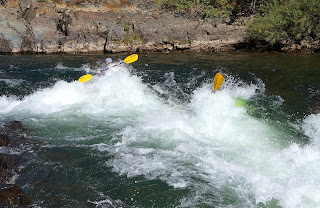 But they don't really realize that they're at the tail end of the release. They're fine as they float down the easy start, but they have a swim when they enter the Gorge proper. No problem, they still recover the boat, it just takes a while. But now they're behind the bubble of water and everything's getting shallower. The rapids are different. There are more swims at Satans and boats go further downstream. There are no rafts to help out and even the photographers have gone home for the day. By the time everyone's sorted out it's starting to get dark. There are still more class III rapids to go and everyone is cold and hungry. Most of the people decide to walk the hard rapids but that slows them down more. The best paddler in the group (who hasn't swam yet) decides it will be faster to just run it. When he flips and misses his roll because he's in shallow water there's no one around to help. His boat is gone as he crawls to shore. It's cold now. He's on the other side of the river, the one without the trail. What to do?

Both of these situations have actually happened multiple times. Why? Because new kayakers will always make the mistake of relying on their own experience to make decisions, but that experience is lacking. They know some things, but still don't know what they don't know. How do you fix this? You listen to those who've been there. Learning through experience is overrated when it comes to safety. Learning through the experience of others is the way to do it. Put your ego in check and ask some questions, even if you think you know the answers. Instead of assuming this time will be just like last time, think through what could happen if something changes - because it always will. 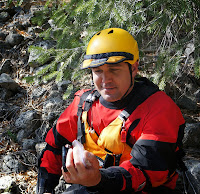 For those of us that are experienced, how we share information is also important. Don't try to scare people, don't try to tell them what to do. Focus on informing them of the risks. Share some stories that they can relate to, let them know that you were once less skilled and made mistakes. Let them know that it's okay to screw up when the consequences are small but not when they are life threatening. Putting the situation in context will allow them to make the judgment for themselves but with the strength of your experience. We are each ultimately responsible for ourselves, and that's another great thing about this sport.

I've had to hike out of several rivers. I've had to wait out the weather while cold and miserable. I've had to take friends to the hospital. Some of it was preventable, some of it wasn't. There are risks in this sport and we can't avoid them all. But I've learned from each of those incidents (here are some good ones: Rubicon, South Silver, Channel Islands), and I've shared my hard won experience with others so they don't have to live it themselves. I continue to listen to others' tales so that I might have less exciting stories to tell in the future. I never assume that the next time will be just like the last.

So if you're reading this and you're new to kayaking. Or if you've been doing this a while and are pushing into new territory. Or even if you think you've seen and done it all. Take a moment to think about the consequences the next time you go for a paddle. Make sure you are prepared. Make sure you do have the knowledge to make good judgments. If not, seek out that wisdom before it's too late to find it. Have fun and be safe out there!