In a couple of weeks I'll be teaching at Paddle Golden Gate (renamed from the Golden Gate Sea Kayak Symposium). One of my courses will be on combat rolling, so as I was working on my syllabus I figured it would probably be a good thing to get in some rolling practice of my own. I've haven't been paddling that much lately and when I've gone out it's been for fun, not work. And just like any long-time paddler, us instructors can get a little lazy on skill practice - when it's cold out and you don't have to flip over, why bother? So I hadn't done much rolling, especially not in cold water. Time to make up for my laziness.

I went out on the river - the surf was big and nasty - and planned to get in some quick rolls and head back home for some housework and then a hike (getting in shape for a backpacking trip - there's always something to get back in shape for). I wore my drysuit, put on a nice neoprene skull cap under my helmet, even had my pogies on. The weather was mid-50's (this is California, after all) and the water was several degrees colder than that. Not the most frigid conditions for paddling, but cold nonetheless.

I paddled upriver a ways to warm and felt quite toasty before I started some bracing to loosen up and get my face wet. The cold water refreshed me and gave me the usual doubts - did I really need to go over? I did, so I rolled. My left side rolls felt fine. I'm right-handed and learned my right side first, but my left side has always been smoother and easier. I never try to muscle it. My right side worked but didn't feel as smooth. I was fighting it and wasn't sure exactly why it wasn't working so well. I kept rolling, mostly the right, occasionally the left. Over the course of half an ourh I probably did thirty or forty rolls, with some paddling breaks to stay warm.

While I was intent on smoothing out my technique I didn't pay enough attention to my location. I drifted a bit into the shallows and on my next roll attempt I hit the mud with my paddle (side note - diving blade angle not good). I struggled to pull the blade free of the mud and by the time it came clear I was low on air and quite discombobulated. I instinctively set up for a roll on my right side but I had no clue where the surface was and my roll failed completely. I pulled my skirt and quickly wet exited for some air.

In eighteen inches of water it should have been easy to stand, but when I tried to get to my feet I fell right back over. I held on to my boat and anchored a foot in the mud so I wouldn't drift in the mild current. The world continued to spin and after a minute I gave up on the notion of walking and crawled my boat into shore. A couple minutes of rest on solid ground returned the steadiness of the horizon and I was fine. 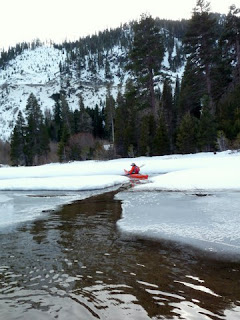 I've always known cold water on the inner ear could induce vertigo. It primarily happens when cold water gets in one ear and not the other - something facilitated by wearing a hood and twisting yourself upside down underwater. But I've never experienced it myself. I think it's because I don't normally spend that much time upside down. Quite disconcerting.

It wasn't a danger in my case - even though I was by myself, I was smart enough to practice in a protected place near shore. But if it had happened while out in the wild it would have been a different story. The good news about the effect is that it generally goes away once the water in the ears warms up - so even if you're floating in the swell it should subside after several minutes. But that means you have to be prepared to spend several minutes in the water; another reason to dress for immersion.

It's good to have confidence in your skills. It's good to have a combat roll that you believe will never fail. It's still necessary to have backup. It's still smart to practice and keep your experience fresh. Our bodies fail us sometimes, often in new ways we didn't expect, often through no fault of our own. Cold water vertigo seems to become more common as you age - and we're all getting older.

The solution is simple: earplugs. I've misplaced my own or I would have worn them. Not only does it limit the chance of cold water vertigo, it helps to protect the ear from surfer's ear, a much more serious and long-term problem. I'm going out to new earplugs now :)
1 comment: 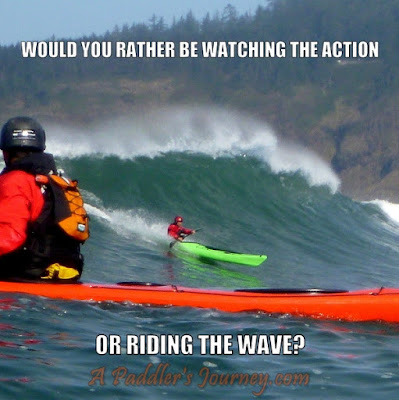 For the edification of my blog readers, this picture was taken in 2011 at Oceanside, OR. The paddler on the wave is Sean Morley, in the just released P&H Delphin. It was the day after the Lumpy Waters Symposium, the traditional 'Coaches Play Day'. The waves were big, but mostly friendly. A larger set did come in and catch a few of us inside, with one imploded hatch and interesting rescue to follow. Good times.
2 comments: