The other day was the Summer Solstice - the official start of summer and the longest day (daylight) of the year. By shear coincidence I took advantage of that fact by getting in two laps on Slab Creek. The run itself is quite quick - a little over an hour - but what makes the long day relevant is that the gate to the put in automatically locks at sunset. So if you haven't gotten of the river and driven shuttle in time your vehicle gets locked in overnight. And for my second lap of the day my friend was flying in for business and meeting me at the takeout late in the afternoon. We ended up with a small window to squeeze the paddle in and get out in time.

I haven't been paddling a lot lately and the rust showed on the very first rapid of the day. To be fair, it is one the the trickier ones with some juicy holes and F-U rocks. I was on line but angled off and got flipped in the main drop, rolled up in time to back surf the next hole and get flushed out upside down before rolling up at the bottom. A good wake up that kept me upright for the rest of the run - until the very end. After running the tough final rapid you need to catch the eddy on the left at the bottom in the runout. I was a little tired by this time and started cutting left too hard - only to get flipped and then rolling and dropping down through the rest of the run out. No real problem, but I created a much longer hike back up the canyon to climb up to the bridge.

My second lap went much smoother - at least for me. The water level had dropped from 1300 to about a 1000. And honestly it seemed to make things a little harder - more rocks popped up and lines became finer. For this lap there were just two of us - I was showing a buddy down for his first time. Due to the time constraint we just kept paddling and he relied on my quick beta and following my lines. I think my lines were fine but maybe not the easiest to follow - he had a couple swims and I had the joy of trying to wrangle a large boat full of water into a small eddy between big drops. It was all good with no permanent damage to boat or boater.

Here's video of the first two rapids on my first lap. Luckily I'm a quick learner...

My friend Cate was talking about getting good pictures of sea caves on her blog - Liquid Fusion Kayaking. So this one is for her. 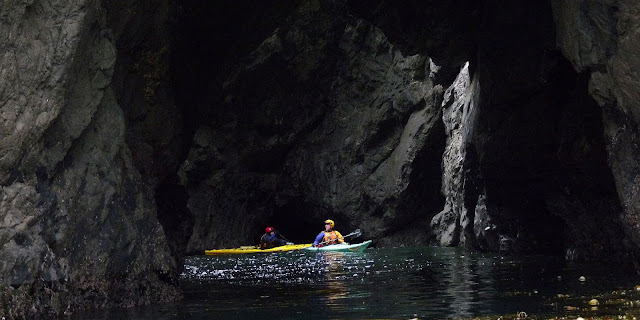 Taking pictures on the water is always difficult. Sure, you can pull out that point and shoot waterproof camera and take a quick shot. And chances are you'll be able to get a picture showing the general scene. But getting a good picture, one that captures the spirit of what is happening, the dynamic physical location you are in, and one that is in focus, properly exposed, without water drops on the lens - those are hard to come by. One of the most difficult things to capture on the ocean are sea caves. They tend to be dark (except where the blinding light comes in); they tend to be wet with water dripping and splashing; and they are often involve a lot of movement of both camera and subject. But here are some things I've learned to try to get a better picture out of bad a (from the camera's perspective) situation. 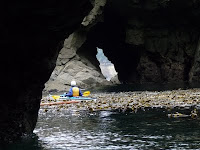 Cheat. Use and arch or tunnel instead of a cave. Cave's technically go in and end - that's going to be dark. Getting a picture, especially with a point and shoot, requires a good bit of light. Tunnel's and arches have light at both ends and allow you to get a shot that looks like a cave. And really, out on the water tunnels are just as fun to explore as caves. 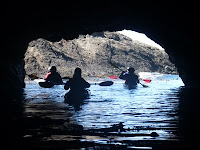 Shoot out. Getting to the back of the cave and shooting out into the light can get a good picture. But it's very tricky to get the right exposure. You can't let the camera focus on the dark or the light of the outside will wash out. So try to get something that is out in the light - like a waiting kayaker - and focus on that. It will help the automatic exposure cameras get a clear shot while creating a sharp silhouette of what is inside the cave. It doesn't necessarily show the real dimensions of the cave but it gets the feeling across pretty well. 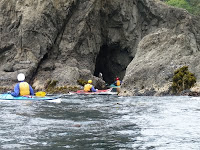 Shoot in. Sometimes you don't need to actually get the inside of the cave to get the feel of the location. Get a picture of the kayakers lined up on the outside ready to go in. If the viewer can see that people are disappearing into the rock they understand it's a cave. And a little mystery is sometimes better than a full exposition. 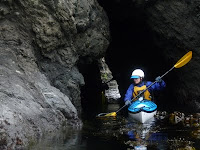 Use a better camera. I think every photographer out there, whatever camera they are using, knows deep down in their soul that they could get a better shot if they had more expensive gear. But even if you could afford the really good stuff the size and logistics of carrying it and using it on the water make it impractical for everyday use. But getting something that allows more control of shutter speed and exposure makes a huge difference - automatic setting just get confused by the mix of dark and light in and around sea caves. I use a Panasonic Lumix FZ28. It's not waterproof but it's small enough to fit in a little Pelican case and cheap enough that losing it to the ocean would not devastate me.

Those are a few of my thoughts and a good excuse to put up some nice pictures. All the picture above are from Mendocino - where Cate and Jeff operate Liquid Fusion Kayaking and possibly the best coastline to paddle in the state (or the world for that matter). Every sea kayaker should make the pilgrimage there at least once in their life and Jeff and Cate are the best local guides you will ever find.

The joy of teaching

Teaching kayaking is a job. It's a fun job, but it's still work. Especially on the river. You have to constantly be looking after your students. You are always on and paying attention to a million things that most people would never notice - where you position yourself on the water, where the hazards are, what are the students' energy levels, how long will it take to get to the park if no-one swims, if one person swims, if there are multiple swims? And many more. It's quite a different mindset from simply paddling.

A lot of instructors will tell you that the fun part of teaching is the students - seeing them progress and learn; seeing them have fun and discover this wonderful sport. And while that is true it's also fairly consistent. Teach long enough and you will see every different type of student. They become a constant in the equation. While some may be more fun, some more challenging, and we might really connect and keep in touch with a few, we do our best for every single one regardless.

But when you get to work with other instructors it changes things immensely. When you get to work with good friends who are gifted and capable teachers it eases your burden and opens the path for more fun. After all, students come and go (rather quickly for the most part) but your co-instructors and friends are with you a season, a year, a lifetime. That relationship is a far deeper thing that has more personal meaning than the student-teacher dynamic. I mostly teach alone and I do enjoy it. But working with my friends brings a joy to teaching that can't be found alone. My funnest days at work are dictated by those I get to work with and on that score I am indeed a lucky man.