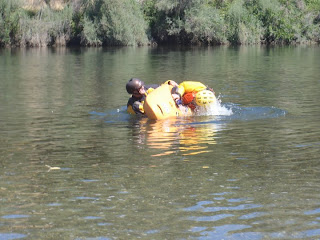 I had an interesting little discussion the other day with some fellow instructors about teaching the roll. It's one of the hardest things to teach for many reasons: it's a hard thing to learn, it takes a lot of time, it can be physically challenging for the instructor, and there are lots of different ways to do it. I'm not going to spell out the details of rolling (or teaching it) here, but the approach I take when teaching and the way I think people should approach it when learning.

I've been teaching rolling for over a decade now and have taught hundreds of people how to roll. So I want to share my philosophy with the acknowledgement up front that there is no single answer. Other people may do things differently and I'm not saying that's wrong. But I've learned a thing or two in my time and seen a lot of paddlers rolling (or trying to roll) in different environments. I have specific reasons for doing the things I do.

I teach a modern (modified) sweep roll. The main points are a neutral blade angle during the sweep and a finish that does NOT lay back onto the back deck. It's the roll I use and what most everyone I paddle/teach with on the river or in the surf is using. I originally learned and taught the C to C but have since revised my opinion on that technique. (you can see a little clip of the differences in this post here)

The sweep roll I teach has several benefits over other rolls. It is gentle on the body, it doesn't require great flexibility or strength, it keeps the shoulders in a protected position, it will work with any type of boat. The only real downside is that it is hard to learn - you have to do several different things with your body with just the right timing. While upside down. Under water. Yeah. Once you get it it's easy, but that may take a while.

I believe that you should teach people the right thing from the start. Don't use shortcuts that involve different techniques that have to be unlearned later. Don't let people develop bad habits that they'll have to break. I can get someone rolling on their own quicker by doing the C to C or using an extended paddle or laying on the back deck. But I've worked with too many paddlers over the years who have discovered the limitations/dangers of those techniques in real conditions and now want to change to something that's better - and I've seen how hard it is for them to make that change. A little more time up front learning the right thing can save you months (years) of hard work later on and can prevent injuries that interrupt your learning (and your paddling).

And I explain that to my students. I get their buy in. I tell them up front it's going to take time. But I explain why and that makes it OK. It's important to give student success to keep them motivated, but when that short term success comes at the cost of slowing long term success I don't think it's worth it. I find other ways to create success - mostly it's just an attitude thing. I've had students take four or five sessions to get their first roll and they kept working at it because they knew it was worth it. They always left smiling.

So I teach by breaking the roll into individual muscle movements. I get people to practice those movements so they create the proper muscle memory. Then I start putting the movements together while still upright and dry. I get people to feel the rhythm and timing that is a proper roll. Then I support them so they can roll from a nearly upside down position - head still dry. When they're doing things correctly and rolling up from this position on their own, then we start going under water with me still supporting. It may take a couple hours just to get to this point (or ten minutes depending on the student). Then it's just a matter of getting them to repeat under water what they were doing when their head was still dry. That's the challenging part - mentally getting people to repeat what they can already do. That's what can be frustrating for the student.

This is the point where people often want that feel of success. They want to get up. But if you give them something to accomplish this that is different from the core muscle movements it will create a crutch that's hard to break. If you hold their paddle it gives them support that their body learns to rely on. If you extend their paddle it creates leverage they can push against (not something you want or need in a proper sweep roll). If they finish on the back deck they will get used to it - and being on the back deck in the middle of big conditions is not where you want to be. If they can muscle the roll that means they are straining muscles that can lead to injury. A proper roll is effortless.

So I stay focused on the proper technique and generally step back instead of pushing forward. I have students repeat the initial individual movement exercises. I have them practice the timing while upright. It doesn't give that same feeling of success, but it does give the same muscle memory for a proper roll. If people know that they are on the right path and that they are moving forward, if slowly, they will continue down it. And the reward when they reach the end is worth it: a solid roll that works when it's needed, doesn't lead to injuries, and inspires confidence in paddling. It takes time. It takes patience. It takes perseverance. From the teacher and the student. That's how I roll.
No comments:

So you want to be a better paddler? Guess what, you have to work at it.

I hear from a lot of people how they wish they could paddle better - be it harder whitewater or rough ocean. When talk turns to surfing big waves or going to remote places, many paddlres get that jealous look in their eye. They even say it: 'boy, I wish I could do that.' As if you must have some secret code, or god-given talent to become a skillful kayaker. My favorite is 'you make it look easy', implying that in reality it's extremely difficult and unreasonable to expect them to be able to do the same.

But it is easy. You just work at it. You make a conscience effort to improve your skills. You work on drills. You watch other paddlers. You try different things. You fail. You try again. You put in time and effort and do it in a deliberate manner. And then it's easy. 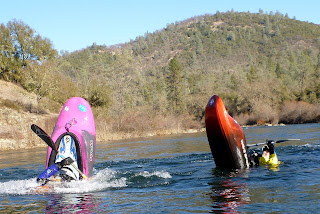 Time alone is not enough. Lots of people think that improvement comes from time in a boat. Us instructors often say the same thing. And paddling will improve your paddling. But practice will improve it more and faster.

If you go out to have fun you probably will. But sometimes I go out to improve. It might not even be fun (though it usually is). I work on technique. I do interval training (well, I used to - but the point is I've done it). There has to be some thought behind it. Some awareness of what you are doing and what the result is. It may mean running a river that's easier so you can relax and make it more difficult. It may mean going out in conditions that frighten you (with some more skilled friends to provide safety). It definitely means repetition - often to the point of boredom. It's different than just paddling. 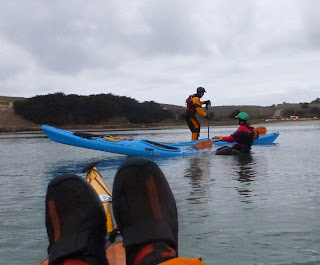 And don't think a class is the answer. The class is merely the start. It only shows you what to practice. Any skilled instructor and can show you lots of stuff to work on. But they can't do it for you. If you take the same class over and over again or one class right after the other, you might be shortchanging yourself. People say they always learn new things - great, but have you actually mastered any of the old things? You can now do a cross-bow draw but can you use a regular bow draw to maneuver through the rocks? Doing the basics really well will get you further than any advanced technique.

At the end of the day, it doesn't really matter if you get better. If you are having fun and that's all you want then keep doing it. There's nothing wrong with that. But if you want to get better, if you listen to others' adventures with wistful longing, if you aren't satisfied with the choices you have, then do something about it. Don't expect it to be all fun and games. Don't expect it to happen overnight. Anything worthwhile is going to take some work. But if you enjoy the process you'll enjoy the result all the more.
1 comment: