Well, we didn't exactly have NO water. We had some. Just not very much. And it wasn't because of cold weather which can happen sometimes in April. No, we had super low flows for this year's Kern River Festival because there just wasn't any snow to melt. The Brush Creek race, the highlight for many boaters, was canceled. There wasn't even enough water to make scraping down it worth the short hike in. And forget about Dry Meadow or most of the upper Kern - with diversions in full effect on the middle stretch it was hardly recognizable as a river.

But while most of my NorCal friends opted to skip the six hour drive down to the Kern I was still committed to going. It's the one time of the year that I know I can find a large number of my SoCal friends in one place. Maybe we can boat a little, but more importantly is the chance to reconnect and see what everyone is up to - who has a new boat, a new shuttle rig, or new kids on the way.

So I never wavered in my plan to attend. I got to see some friends from LA and San Diego who came up to paddle. I got to stay with my buddy Gilbert who's now retired and making the most of his free time: he did the Gold Medal Camp the week before, competed in the triathlon and slalom races over the weekend, and is planning a Tuolumne trip and more paddling this week. The weather was warm and the town was full of boaters having a good time. It was enough to make me happy.

But my dedication was rewarded with the announcement the night before I headed down that the road to the Forks was open. The Forks of the Kern is one of my all time favorite runs but the road is never open until May due to snow (or apathetic Forest Service workers). But some of the locals at Bakersfield Whitewater put the pressure on the Forest Service and use the lack of snow to our advantage and got the gate unlocked for the weekend. Paddling was back on the table.

It ended up being the lowest I've ever done the Forks (about 450cfs) but it channelizes pretty well. The run was easier at this level - as long as you dodged the rocks - and its the first time I've run every drop on the same trip. It was a great day of paddling in warm weather with old friends and new. I also squeezed in a little slalom practice (someday I'll have to take more time to train - it's so fun!) and a nostalgic paddle leading someone down the Powerhouse run for the first time (the same run I learned to paddle on).

Here's a few clips of our Forks run - didn't shoot much since we had to keep paddling to get the 16 miles done as fast as we could with the slow pace of the current.

Having spoken recently about the benefits and drawbacks of certifications, I just spent the past week up to my eyes in the topic. First I taught an ACA instructor training course on the river for California Canoe & Kayak. Ten newly certified (or re-certified) instructors came out of it. It was a really great group of people from a wide variety of backgrounds and everyone left with new ideas and more energy to go out and create new paddlers.

Some of the candidates were experienced paddlers who had never taught on the water, some were experienced teachers of kayaking who will be able to get more work being credentialed, some were relatively new to paddling and new to teaching who improved their skills as well as their ability to share those skills. Some were looking to teach professionally, some were hoping to work with wounded vets on the water, some were just there to improve themselves and their enjoyment of the sport. This variety benefited everyone and will no doubt benefit all their future students. I bet most of them would have become great instructors if they had never gone through the program. But it would take longer and be a harder road. This was five days of intensive learning and a mixing of perspectives that would be hard to replicate even with years of solo experimentation. It's efficient and I'm very proud to welcome these folks to the ranks of ACA certified whitewater instructors. 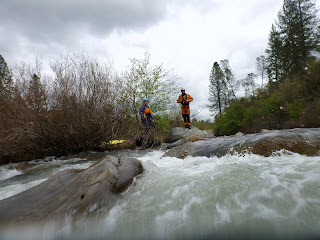 Right on top of that was a swiftwater rescue course. I joined the rest of them as a student since I needed to update my own certification. This training is required for the job and it's a two day crash course on handling what can go wrong on the river. Unlike my previous training this was a kayaker specific course (I've found that 'boater' courses often are for rafters and their issues and equipment are just plain different). The course was put on by Sierra Rescue and they have developed a program that is really just for kayakers and it made a world of difference.

While I can't say that I really learned a ton of new stuff it was still a worthwhile experience. That's another thing about certification - it forces you to stay current and practice what you've learned. And practice can make all the difference in the world when it comes to life threatening emergencies. I was happy that I didn't miss a rope toss all weekend but I did miss a few things in the scenarios - plans that could be improved upon. We all got a lot of practice and tons of realistic entrapment and rescue scenarios. For those who have never taken such a course you simply have to do it. It really helped to remind me that even in class II whitewater things can go bad very quickly and rescue can be so hard (or impossible) if you don't have some simple skills (rope throwing, shallow water crossing) and a basic idea how to use them. 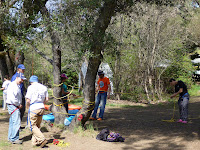 Again, I had learned a fair bit of this before I ever got certified and most of my abilities have come through experience and practice. But what I've learned now is better. Simpler ways to do things - simpler meaning faster and more effective. I also feel a lot sharper on some skills and have been shown what I need to work on to stay sharp. I feel that much more prepared not just to lead beginners but to be safe in my own adventures. That confidence alone is worth the cost and effort of getting skilled training.

In the middle of all this training was the CCK season opening party at the Outpost in Coloma. I can't think of a better way to kick off the season (the party and the training) and I'm looking forward to a fun summer of boating (even if our snowpack sucks). I'm even happier to be sharing it with quality people - people who know what they're doing and do it well. Let the flow begin!
No comments: