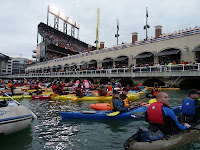 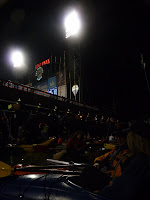 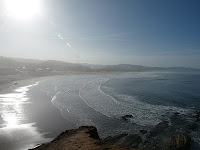 This past weekend was the Lumpy Waters Symposium put on by Alder Creek Kayak & Canoe.  Held in Pacific City, OR it was a weekend of instruction and playing on the Oregon coast with California-like weather.  It was my first year teaching at the symposium and first time paddling that area.  But I am definitely going back.  The home base for the weekend was an RV park just across the road from the pub which was right on a perfect surf beach.  A short drive south led to the Salmon river for some surfing and caving; a short drive north led to Oceanside for some surfing and rock gardening.  With nice cabins with hot showers for the coaches it made for an incredibly easy and fun weekend. 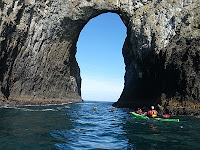 But while location is key, the real fun at these events is the people.  The students are eager and ready for advanced courses; you get to teach with a variety of awesome instructors; and if you're really lucky you get to stay an extra day and paddle with your buddies.  I rode up to the event with Sean (much nicer than driving solo) and was looking forward to seeing Dave and Paul from Alder Creek and Matt from the San Juans and Chris from Nova Scotia.  It is this variety of folks from across the country that makes the weekend seem more like a paddling party than work.  And getting in a half day of surfing and rock gardening before heading home was one of the best days of paddling I've had on the ocean. 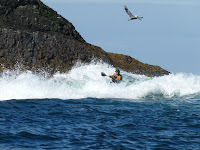 Pictures HERE and video below.  It's hard to get good pictures or video while teaching but I got some good shots this time.  But the stuff from our paddle the day after is much better - check out the last half of the video to see for yourself.

Seems like I've been getting asked a lot about paddle feathering lately.  People want to know what feather they should get on their paddle.  The questions indicate that most people aren't really sure what it's all about - why are paddles feathered?  I realize that as an instructor I'm guilty of glossing over the issue to beginners (and I don't think I'm alone there) because the answer is a little more complicated and a little more vague than you really want to get into the first time someone picks up a paddle.  So here's a little primer on feather angle that may be a little different from what you've been told before (or maybe it's just old news to you...).

Feathering refers to the offset of the blades on a paddle - holding the paddle horizontally one blade will be vertical while the other will be tilted at an angle.  On an right hand control paddle (more explanation shortly) when the right blade is vertical the left blade will be tilted forward and the degree of tilting (the amount of offset) is referred to as the feather angle.  For a left hand control paddle it's the opposite.  For an unfeathered paddle there is no offset - both blades will be vertical at the same time and their is no control hand.   Right hand control means that for proper technique the right hand grip stays constant on the paddle shaft while the left hand needs to allow the paddle to rotate within your hand (left control is the opposite).  It doesn't really matter if you're right or left handed but it's often more natural to let your dominant hand be the control hand.  Though left hand control paddles are much harder to find so you lefties might just want to go with the right hand control to make your life easier in the long run. 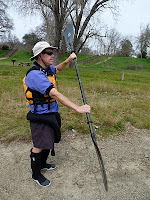 So that's the standard info on what feathering is but the real question is WHY are paddles feathered.  The old answer is that when one blade is in the water the other can slice through the air more efficiently.  That's basically bunk - only true if the paddle is feathered at 90 deg and if the wind is at just the right direction.  The real reason is that using proper modern paddling technique there is a natural angle difference between your two wrists and if the feather angle matches that angle it will allow your wrists to stay in a neutral position which is better for your joints.  Try a little 'paddling' on land and take the time to watch your wrists and note the amount the paddle shaft rotates.  This rotation depends upon your technique - if you are paddling with a low angle stroke (or just using your arms instead of torso rotation) then the angle is generally small (or non existent).  And using a higher angle stroke generally requires a higher feather angle.

In whitewater kayaking there has been a trend to smaller feather angles - or even completely unfeathered paddles.  A lot of this has to do with playboating where unfeathered blades work well in certain tricks.  This type of paddling is very different from your basic forward stroke so it has different requirements.  But the low angles have spread to the rest of the whitewater community, often for no good reason.  Though it is also true that lower angles will work for folks with poor technique, an unfortunately large segment of the population.  Higher angles work best for forward paddling but can make some other techniques a little trickier so most folks cap out around the 45 deg. mark.


In sea kayaking there are actually two opposing trends:  more high angle technique using Euro blades  (which is often best served with an angle around 60 deg); but also more folks are switching to Greenland paddles which are unfeathered and use a different paddling technique all together.  Many people believe that unfeathered paddles are best for those who are experiencing pain in their wrists or hands but that is not NECESSARILY true - again it comes down to different things work for different people.

The key take away is to think about what type of paddling you do, what type of technique do you use (or aspire to use) and make sure your feathering matches up with that.  Don't just go with whatever paddle you happened to buy before you knew any better.  Don't just copy the fastest guy in your paddling club.  Don't just listen to some random guy spouting off on his blog.  Actually analyze your stroke and wrist position and maybe try some different feather angles and see what works for you - which means is easiest on your joints.  That's the ultimate purpose of a feathered paddle:  to allow you to paddle without pain.  As long as you can do that you are good to go.
8 comments: