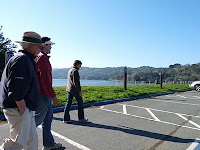 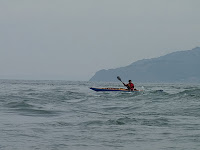 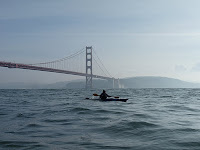 A gaggle of paddlers 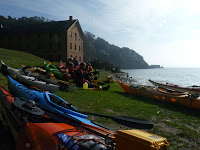 Saturday was our annual instructors paddle/meeting for California Canoe & Kayak. We get together somewhere in the Bay area for a little paddling, a little administration and lots of good company. This year we got in a short paddle out to Angel Island and then back to the Presidio Yacht club for refreshments. The fog was heavy when we arrived but by the time we had gotten through catching up and gearing up with all 24 folks the skies had cleared.

The paddle was nice but the real point of the day is spending time with a bunch of good folks and talking about teaching and stuff. Kayakers in general are a nice bunch of peop 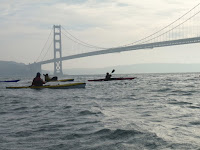 le but those who choose to help share the sport with others are an even nicer subset. And while I've been teaching in the Bay a fair bit recently I live two hours away and don't get to see the instructors down there that often. It was nice to connect again and it makes me want to get back down there more often. So many places to paddle and so little chance to make money to pay for it...

Here's a link to more pictures on CCK's Smugmug site and my own Picasa site.
No comments:

We had a weekend of wet and windy weather down in SF Bay for the ACA instructor certification course I was teaching this past weekend. My personal goal was to stay warm for three very long days of much sitting around in cold rain (you don't actually paddle a lot during these types of classes) and sleeping in a boat house. I can't emphasize enough what a difference a dry suit makes in these circumstances.

On the instruction side it was a blast. We had a great group of candidates who never let the weather get to them. We ended up with some good unplanned scenarios - always the best kind. We had lots of interesting presentations and great discussions about teaching techniques. And we got a little bit of play time in the messy surf at Half Moon Bay on Sunday. It all went like clockwork which is not easy when conditions and plans are changing and you have a large group (eight of us total) to move around.

Going through the certification process takes a significant amount of time, effort and money. It shows a true dedication to the sport and a serious commitment to teaching. It can also be quite bruising to the ego and requires a good dose of humility and openness to criticism. The end result is normally a trans-formative experience in the life of a kayak instructor and well worth it. It makes me happy to be a part of that process for others like those I have learned from were to me.

Unfortunately I don't have any pictures or video due to the rain and being constantly busy teaching...
No comments: 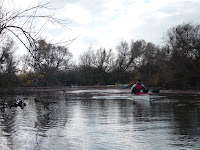 I woke up Sunday to a freezing cold morning. Literally. 32 degrees in Folsom. With snow expected later in the evening. But that didn't deter our hardy group of paddlers heading down to the Cosumnes River Preserve for the day. And once we arrived at the Preserve the sun was out and it was warming up - at list a little bit.

The purported goal of the paddle was to do some bird watching. In particular to catch the sand hill cranes on their winter layover. But with the cold and approaching storm the animals had the sense to stay hun 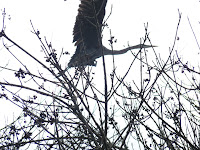 kered down and out of sight even if us people did not. But regardless it was a nice enjoyable paddle and everyone managed to stay warm enough while paddling - cold starts not withstanding.