Sometimes it's the little things that make you happy. I taught a Whitewater 101 class over the weekend and it was a big and fun group. The water was high, making it challenging, but the weather hads finally warmed up so no one was too worried about getting wet. Drifting down the river on the second day I found a woman's shoe floating in the water and picked it up. Setting a good example of trash removal for the students.

Well, right around the corner, at the next big rapid, all hell broke loose. Multiple swimmers, lost paddles, the group spread all over. After towing a couple different people to shore, rounding up boats, attaining to check on folks and reunite everyone, I looked down to see the shoe was still sitting on my deck. Completely unscathed. (the people were all fine as well). When someone noticed the shoe and asked what I was going to do with it, I said I would award it to whoever had the best line in the next big rapid. A little encouragement is all it took to keep the carnage to a minimum and everyone had clean lines. But some people went left, some went right, so each side had a 'best' line. I solved that one with my river knife and two ladies left with half a shoe and full smiles. A good weekend on the river.
No comments:

It's a common bit of advice that you hear all the time in kayaking when people are shopping for a boat: demo, demo, demo. Everyone advises you to try a bunch of different boats out to really see what you like. Sounds logical enough, but the truth is quite so simple. If you had unlimited time, access to every boat in the world, and a myriad of conditions to paddle in, then demos work great. But for most paddlers, especially new ones, demo's have a limited value that people need to understand.

For instance, I had a customer on the phone the other day who was asking about a couple different boats. His list of boats to explore was given to him by an outfitter and only had about four names on it. After asking him a couple questions I could easily expand his list of possibilities to a dozen boats that fit his criteria and a dozen more that might actually work great for him. When I mentioned one of those boats he said he had tried it and dismissed it. He had 'sat in it' and it was 'too big'. That particular boat has a composite seat that is designed to be outfitted by the end purchaser - it actually creates a stronger seat platform and allows customization that ultimately makes the boat more comfortable than any off the shelf seat. So he never bothered to try the boat on the water and missed the whole point by his 'demo'.

Working at a shop we have people demo-ing boats all the time, and talking to them afterward most don't have a clear understanding of boat design characteristics and how those things translate in different environments. I honestly think that if you do a fair bit of research into general boat design styles, try out a few of vastly different design, understand what you really want out of a boat - then you can really narrow things down and actually make a good decision without ever paddling the boat. But that's not how most people approach it - they do tons of research on specifications but not the analysis of what it means, of how those numbers connect to them. They go by a much more vague criteria - what 'feels' good. Which often means what is comfortable and what is not. And in the end, if you find the boat comfortable, that is enough for most paddlers. Performance is actually an afterthought. (look at the boat reviews at Paddling.net and you'll see what I mean) 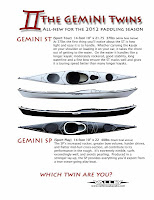 For me, it's all about performance. I can make any boat comfortable if I take a little time (on my Ikkuma 17 I put in a Jackson Sweet Cheeks, glued in some foam hip pads and a little more foam on the knees - too about 15 minutes). But I want to know how it handles and what it can do. And I've paddled enough boats with different characteristics in different conditions to have a pretty good idea of what to expect. When I saw the first picture of the Valley Gemini, I knew I would like it. When I got to paddle it for five minutes on flat water I knew I loved it. You see, I know what I like and what I'm looking for in a play sea kayak: hard chines, lots of rocker, volume in the nose, symmetrical design. That's the Gemini SP. It also happens to have a comfortable cockpit, but that's just a bonus.
No comments: 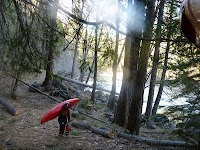 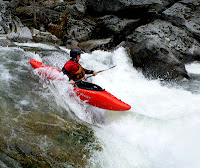 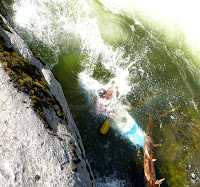 But, in spite of  being rusty, I did have a great time. I nailed some lines perfectly, I survived all my mistakes and did some quick corrections. I felt much more comfortable and aware of my boat and the river by the end of the day. I'm ready for the season to begin.
2 comments: