Cup of the North - Kayak Polo

Well, Edmonton is not exactly in California, but I spent last weekend up in the great white north playing kayak polo and wanted to share the fun. The Cup of the North is a kayak polo tournament put on by the Edmonton club which is run by Darrel and Dale O'Brien. They are twin brothers, in their sixties now, who have been competitive gymnasts, national wildwater and slalom racers (C-2), and really brought the sport of kayak polo to North America. They also still play hockey, heli ski and are just learning to snowboard. They have their own kayak manufacturing company (Obeco) which is the only company to make polo kayaks on this continent. And oh yeah - they are also both doctors. You couldn't find two more remarkable guys who also happen to be the most down to earth and friendly hosts to ever put on a kayak event (Darrel let me crash at his place and Dale got up at 4:30am to drive a bunch of us to the airport on Monday!).

The tournament itself was pure fun. I was really rusty having basically retired from the sport after hurting my shoulder at the world championships in 2006. I can paddle fine but throwing a ball is very painful. I could get surgery and be able to play again but that might jeopardize my paddling so I opted to skip the knife and focus on other aspects of kayaking. But I can still tough it out for a weekend polo tournament now and then.

I played with a couple guys from L.A. and a couple guys from Great Britain and we ended up in second place. The guys from Britain normally bring a whole team who tend to win the tournament (Eurpoeans are generall more advanced in the sport than us Americans...). So maybe we let the Brits down a little bit but it was an honor for me to get to play with them and they certainly made me look better than I felt. Here is a short clip with some of the action - I was too busy playing to get much video but one of the spectators shot a bunch and said he would send me a copy - so hopefully I'll have some more to show you soon.

Well the long, dry winter is finally getting broken up with some snow and rain. It seemed like everyone was eager to take advantage of the water and get out boating, even if most of the moisture is being held in snow and just more than a trickle is flowing down the river canyons. So 14 people showed up on Valentine's Day to run Chamberlain's on the North Fork American River just outside Auburn, CA. With a flow of 550 cfs at the guage downstream, and clearly less than that on the run itself, the class IV river was a mellow affair and more of a social gathering than a serious sporting endeavor. I personally spent almost as much time stuck in traffic on Hwy. 80 as I did on the water. But this is just the start to a series of storms and perhaps the true beginning of the winter boating season. 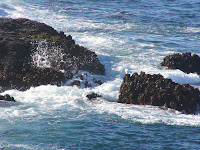 With mild winter weather and moderates swells I spent a few days playing in the rocks along the coast near Ft. Bragg. I was lucky enough to be shown the area by an old So Cal paddling buddy Jeff Laxier who has now started a kayak tour and instruction company in the area (Liquid Fusion Kayaking). Jeff and his partner Cate, and a few of their friends, joined me for three days in the surf and surge. Sometimes we took out whitewater kayaks and sometimes the long boats. For you whitewater enthusiasts who complain about a lack of excitement in sea kayaking check out the videos.