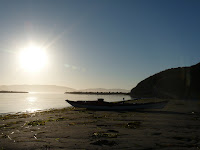 With my Channel Islands Expedition approaching I went down to the coast for a couple days of training paddles.  Day one was a solo trip From Bodega Bay up to Jenner to get some distance in (around 30 miles).  Conditions were very mellow so a good representation of what we expect in Southern California. 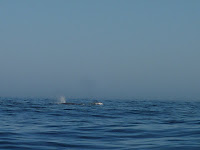 The paddle went well and in addition to the nice scenery of coastline I passed a couple whales playing just outside the breakers on Bodega Head on my way out.  They were still there when I returned and had attracted a large crowd on the cliffs above.  There seemed to be three or four of them playing just outside the waves - closer in than I wanted to go.  But they ended up working their way out and actually came close enough to get a few good pictures. 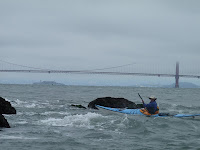 The next day I went out for a shorter paddle with Sean Morley who will be joining me on the expedition.  Sean claimed that he hasn't been getting enough paddling in so was a little worried about his fitness.  We set off from Horseshoe Cove and crossed over to San Fran under the golden Gate Bridge - ferrying across the ~2 knot flood.  Then we headed out along the coast with Sean hugging the shore and playing in the rocks while I chased behind trying to keep up while taking a more direct route.  It was still a big effort just to stay close enough to get a few shots of his rock gardening.  Of course, as soon as I pulled the camera out I would be losing precious ground so I didn't take as many pictures as I would have liked.  I don't think Sean has to worry about his fitness as much and Pedro and I need to worry about keeping up. But then Sean is planning to circumnavigate the islands we are simply visiting so he has further to paddle.

I was also testing out my new video camera mount in different position.  I ended up getting some interesting footage with the camera facing back at me.  It's a pretty standard shot you see a lot in kayak videos that is suppose to show what the paddler is doing and what the conditions are like.  It's fairly easy to do since you don't have to try to hold a camera and aim.  I've always thought it was a bit of an ego shot - a close up focus on the paddler instead of the paddling.  But I have to say after looking at the footage that it actually works pretty well - let me know if you think otherwise.  Though I would much rather the camera were pointed at someone else instead of myself.