I mentioned in my post a couple weeks ago that our unsuccessful attempt to get to San Nicholas Island in the Channel Islands was chalked up to training for the next time. Well, that next time is coming up fairly soon. I've put together a team to make an attempt to be the first (that we know of) to kayak to all eight of the Channel Islands off southern California. Five of the islands are a National Park, Catalina is another, and the final two - San Nicholas and San Clemente - are owned by the military and you are not allowed to land. I've paddled to six of the islands, my friend Duane Strosaker has paddled to seven - he did a out and back trip to San Clemente Islands solo - but I don't think anyone has made it out to San Nicholas.

The team for the trip includes myself and my buddy Pedro, Sean Morley and Helen Wilson; a stellar te 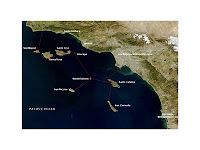 am of a Californian paddlers. Duane was suppose to join us but he's decided to focus on his training for the upcoming Greenland competition in Washington. Our route will start on the mainland outside Santa Barbara and cross over to the islands of the park. We will make our way back out to Santa Barbara Island and from there make a 60 mile and and back trip to San Nicholas. Then from Catalina make and out and back trip to San Clemente. The whole trip should take about 11 days and average over 30 miles a day (with several over 40). I'll be sending in my location to this blog through my SPOT but you can also check out the expedition website. The trip is set to start on Sep. 10.

To get ready for this I've been switching from whitewater to ocean paddling. I wen

t down to the San Francisco Bay yesterday for a little training and since the swells were so small I got the chance to get in close to Pt. Bonita for some easy rock gardening. I've been around the point quite often but never seen it with such small swell (though it was fairly windy). Paddling alone I took it easy and left a couple tunnels and caves unexplored but I still was able to check out quite a number of cool little locations around to Rodeo Beach. Here's a little video of the rocks: