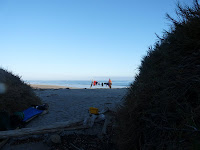 A recap of the situation.  Sean, Pedro and myself set out to paddle to all eight of the Channel Islands off the southern California coast.  After doing the first three in three days (and covering over 100 miles) Pedro and I decided that the longer open crossings we had coming up wouldn't be wise.  So we went to one more island (Anacapa) on our way back to the mainland.  Sean went on to Santa Barbara Island but the winds were not favorable and without the time to wait he headed to Catalina and then the mainland.  On his way he had a not so pleasant encounter with a Blue shark (no attack but plenty of circling and harassment for several minutes) and a more pleasant encounter with a megapod of Blue whales. So the goal of paddling to both San Nicolas and San Clemente is yet to be achieved - but it definitely still on the to do list.

I'm afraid I was interrupted from my Channel Islands video editing by having to teach a whitewater class.  But class is over and the editing is done - video is below.  For some reason my editing program (Sony Vegas) kept crashing when I tried to render a High Def version but eventually I got it to work.  I have to say it might have been a good thing we quit when we did - after doing just four of the eight islands I had hours of video to edit and a really tough time getting it cut down to ten minutes.

Video below and Pictures HERE