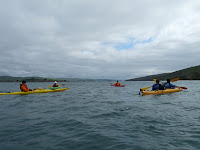 Over the weekend I led a trip on Tomales Bay. The early forecast had been for rain and that scared some folks off. But the forecast the day before was for clearing skies and light winds so I was looking forward to a nice day on the Bay. When I arrived the wind was already blowing around 10 kts so I expected it to get a fair bit windier if the sun managed to break through the heavy clouds. Luckily the clouds held together for the paddle and broke just when we were getting off the water. The wind had risen to 15 kts by the end of our paddle but was gaining strength as we were loading the boats to leave.

For the most part it was a relaxing day with good company. We followed the western shore and saw plenty o

f elk and lots of birds. It also seemed to be a good day for spotting starfish just under the surface - with 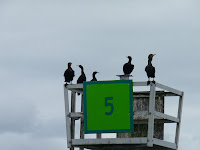 the fairly high low tide they didn't get exposed and we didn't see the usual clammers out in the flats. All in all a very enjoyable day. Full pictures from the day here.

Now I'm off to prepare for the Golden Gate Sea Kayak Symposium this weekend from which I'll be heading south for some screenings of Paddle California in SoCal.