Not so nice day paddle 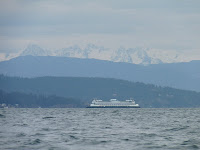 After my screening for the Matelot club in Tacoma (which went quite well) I headed up to the stay at some friends' cabin outside Anacortes. I decided to do a day paddle out to the San Juans to save myself the ferry fare and a little time. Launch from Washington Park and cross Rosario Strait over to Lopez Island and back around Decatur Island. The forecast was for increasing winds out of the SE which I felt I could probably avoid for the most part.

Just before my turnaround I started feeling some pain in my left forearm - a tendinitis sort of thing. It had been an easy paddle and I had only gone about 10 miles so I have no idea why it started hurting. But as I turned around and fought the steady headwind on the return it just got worse. By the time I was half way across Rosario playing Frogger with the tankers in 20 kt winds and rain I started to wonder how this was actually suppose to be fun. When I finally made it back to

the truck and realized I had left the beer AND the oreos back at the cabing I was in a really grumpy mood. It wasn't until I was sitting in the lazy-boy under a warm blanket that I got some perspective: it's these hard days that earn us the pleasant ones. A little pain and a little wind help develop our ability to handle hardship and this is what makes most of the other days on the water so easy and fun. Though I have to say in retrospect I would have been happier spending the day inside on the couch reading a good book.

Last night I went to the pool session for the University of Puget Sound kayak club. Arm still sore I sat on the sidelines and handed out sage advice (like: for the offside roll just do the same as the onside but flipped!). Afterwards we had a screening of Paddle California which the kids seemed to like. They have a great program going with lots of different skill levels that seem to work together well. I'm hoping to get out on the river with some of them in a couple days.