The rest of the Feather 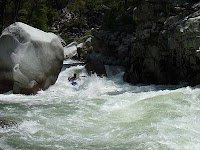 One of the great things about rivers is that they keep flowing until they either hit the ocean or we use up all their water (the second happening more frequently than desirable...).  In so doing they can pass through very different geologies and geographies and can have many different natures.  The Feather river starts high up in California's Sierra Nevada and contains some of the best whitewater to be found on the planet.  The Middle Fork in particular has over 35 miles of class IV/V undisturbed by roads or man, cutting through the granite goodness of California's young mountains.  Ultimately it escapes the mountains and lands in Oroville Lake, a man made reservoir created to help water our crops and control flooding.  Below the dam the river becomes a mellow float with the occasional class I riffle before joining the smooth flowing Sacramento River on its way to San Francisco Bay.  This section starts in the town of Oroville and is currently on track to become California's first truly man made whitewater park. 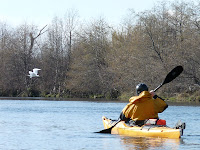 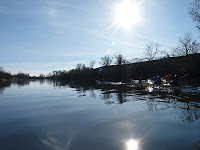 As you follow the river and head out of town you enter the Oroville Wildlife Management Area.  And this is exactly the path we took over the weekend.  The sun finally broke through after weeks of clouds and valley fog and blessed our merry little band with clear skies but chilly air (California chilly = 45F).  We put in at a beautiful riverside park in town and floated (paddled, really, since there wasn't a lot of current) through the wildlife area, taking out just before it ended and the farmlands began.  While some of the bird life was undoubtedly scared off by the duck hunters (we were a little afraid ourselves after seeing the poor aim and control of a pair shooting from a canoe) there were still several of the largest white egrets I have ever seen to mark our progress. 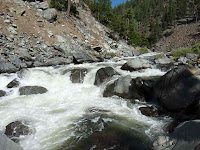 It was a great mix of people, from those who had never kayaked on a river (some who had barely kayaked at all), to those had years of rough water ocean paddling experience.  Some nervous about the rapids, some disappointed there weren't more.  Everyone was in sea kayaks (except for the couple in the open canoe) and the long boats helped make the miles go by a little quicker.  It was interesting for me to be sea kayaking flat water on the same river that remains one of the best whitewater multi-day trips I have ever done.  That particular trip has become legendary for being such a large group and making it to the takeout just as darkness fell (and other adventures).  But the common theme that ultimately made both trips so enjoyable was the people to share it with.  That's the true beauty of kayaking - who it brings together, not where you happen to be.  More PICTURES HERE.