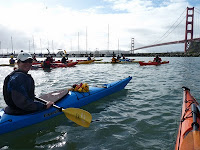 Just got back from a day on SF Bay with the CCK crew.  This was our annual instructor 'meeting' where we talk a little business and review some on the water techniques, but generally play around and have fun.  This time we met at Horseshoe Cove to spend some time in the tidal race around the corner at Yellow Bluff.  Max ebb was 4.6 knots at 1:30pm so we played around until about 1pm when it started dying (it is best an hour before max, after that the tide is too low and the waves shrink).  So we decided to head back in with a little swing by Lime Point (the last point just before the Golden Gate Bridge).

There was a big swell outside and just inside the Point the incoming swells would push against the out-flowing current and spill over a submerged rock, creating a wave/hole to surf that often crashed in upon itself before disappearing.  Several of the group smartly turned back into Horseshoe Cove before reaching the Point (which was kind of the point of no return).  Several of us headed on to try out the wave.  Sean Morley was the first to get to the wave and I moved in to try to get some video (sorry - battery glitch and nothing came out).  A few others got in there and soon everyone realized it was a one boat wave and there was no real eddy.  So one after another people started getting swept around the point - which luckily did have a nice eddy behind it where you could stop to rest and try to figure out how to get back into the bay.

Did I mention that once in the eddy I looked at my watch and it was 1:30pm exactly.  Max ebb.  4.6 knots.  Probably accelerated a little bit by the point.  The plan was fairly simple:  paddle really, really hard.  Success was more subtle but we were all making it work except that one of the guys is recovering from a shoulder injury and was already tired from earlier antics.  He had made it around the point but couldn't quite get past the current.  He was on the treadmill.  I was in front but generously drifted back to hook a line up to give him a boost, thinking I could be the hero.  But together we still weren't going anywhere.  So I gave Sean a nod and he came in to hook up to me - now we were playing with power and I was confident Sean could tow us both in.  But just then I hear the call from behind, "the line is off!".  Don't know exactly how it happened but my carabiner had unclipped itself from his boat.  First time I've ever had that happen.  Brand new stainless steel wiregate carabiner that was in perfect working condition.  Go figure.

So as Sean and I are messing with ropes the current pushes us back to the wave/hole.  And we're both on the wave and still tied together.  Disaster seemed imminent and I braced for impact.  But Sean had smartly dropped his tow belt so we both just got a ride for a couple seconds.  We fell back into the eddy behind the point to untangle.  Meanwhile Kenny had come back to tow the tired paddler, and eventually Bill jumped in as well to get the job done.  Sean and I got sorted and paddled up to join the rest.  Quite the workout for the end of the day and good lessons in planning for current, knowing your limits, having proper gear, and working in a group.  Of course there was no real danger - we could have just waited a little while and had an easy paddle in.  But where's the fun in that.

More PICTURES from the day.