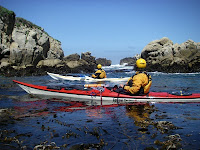 The plan was to paddle the coast from Monterey down to San Simeon, taking in the spectacular Big Sur coast line along the way. The issue a solid stretch of 60+ miles without any protected landings and only a few unprotected ones with any kind of access. So when the forecast shaped up to swells of 7-9 ft. or more it seemed like too big of a risk to go for it. Especially since Jeff and Terri only had three days to paddle - I have a more flexible schedule but didn't feel like going solo in these conditions. So we decided to do some day paddles around the Monterey area.

The first day we

went around the Monterey peninsula with some big swells but light winds. It was a pretty paddle dominated by scenic houses and beautiful golf courses - we landed at Pebble Beach. Day two we launched a little further south out of Point Lobos and had the same big swells and some wind to go with. Not wanting to battle the wind for too long we made it a shorter day just going down to Yankee Pt. and back. Wouldn

't you know it: the wind died just as we got back to Whaler's Cove! The final day we were forced north by the Big Sur Marathon closing down PCH. So we hit up Santa Cruz where there was some protection from the swells and the wind was still down - reminded me of southern California paddling.

So the weekend wasn't the trip we had hoped for but it was definitely a good three days of paddling. It also yielded some nice photos and video.