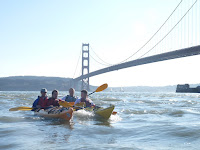 Another weekend another trip to the Bay. On Saturday I helped Steve and Chad finish off their trip to the sea (with Chris and Zack) - paddling down the Stanislaus river and out the Bay to the ocean. We launched in Richmond on the east side and crossed over to Raccoon Strait and on out to Horseshoe Cove at the base of the north tower of the Golden Gate Bridge. We got to dodge some large oil tankers on the way across; then plow through the tide rip off Pt. Stewart on Angel Island (though we skirted the larger rip at yellow bluff just before Horseshoe). With little wind, a helpful ebb current and beautiful blue skies it was an easy day of paddling and the perfect way to end their trip. More pictures here.

On Sunday I went out with a bunch of friends for some paddling and play time. We launched from Horseshoe and rode the fading flood out to Alcatraz and then over to the backside of Angel Island for lunch 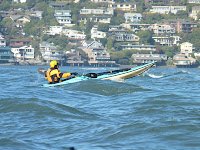 . By then the ebb was starting and we headed around to Pt. Stewart for some of the cleanest standing waves to be found inside the Bay. Everyone was getting nice rides and another group of paddlers from BASK showed up to join the fun. Even with fifteen boaters there were plenty of waves and space for everyone. Eventually we headed over to yellow bluff but by the time we got there it was fading and just confused (which to be honest is its normal condition - confused waves). So we just rode on through and back into Horseshoe. Another mild day of weather creating the perfect day of paddling in the Bay. More pictures here and video below.