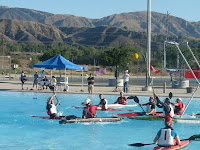 Last weekend was the U.S. Kayak Polo National Championships hosted by my old club down in L.A. I went back to play with the team one more time with the goal of medaling this time after several fourth place finishes in the last few years. There were eight teams in the A division but only four of them were actually U.S. club teams so our odds were pretty good.

Since I now live in Folsom there was no way to really get the team together for practice. And most of our guys are getting a little old in the tooth. So our rusty group had a few challenges to overcome. We started off with a victory over the Ft. Collins club - they were even rustier than us. Then we tied the defending champs - a 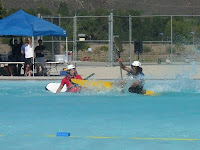 great result for us. Then another tie with a Canadian team before heading into the second round robin. Our next game was the key to get into the top tier for the tournament but we lost to a random assortment of folks by one goal. Then we lost to the Canadian national team by one goal (they ended up winning the tournament) and finally lost by one goal to the east coast guys. While we got dropped down to the bottom bracket for the tournament in the end we ended up playing the Ft. Collins team once again for third place out of the U.S. clubs and we won. So we got our medals but definitely a frustrating tournament for results. Maybe next year?

More pictures and video below: