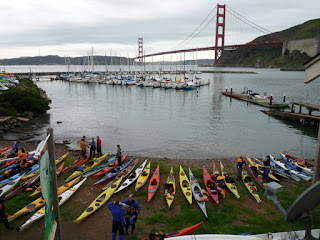 One of the best life skills you can learn through paddling, yet one many paddlers seem oblivious to, is how to manage group dynamics. You can learn a lot about this when paddling with your friends or a relatively small group of like-minded paddlers, but the best lessons come through large group paddles like those associated with a kayak club. These paddles create many opportunities similar to our experiences in society itself: how to coordinate and communicate with others, how to reach compromise, how to deal with people at different skill and knowledge levels, how to share and take turns, and even how to deal with a-holes.

Imagine the following scenario. You're on a group paddle with a dozen or more club paddlers heading down the coast. You reach a shoal between the mainland and a large island. You can cut through the rocks but it looks rough in there, or you can go around the island which will be a lot longer and at least partially into strong headwinds. Neither is an appealing choice, but the shoal would be genuinely dangerous to some of the weaker paddlers in your group - we're talking certain swims, likely boat damage, possible bodily injury. And if you go around the island the strong paddlers (including you) will likely be needed to support, and maybe even tow, the weaker ones. You come together as a group to discuss options and one guy (there's always one guy) says you should just go through the rocks. It'll be fine (he means he will be fine). And if anyone doesn't want to go that way they can go around on their own. This proclamation is met with a long pause.

It's at this point you think it all could have been avoided if people had listened when you suggested a paddle on the other side of the Bay. You all could have been paddling in a sheltered cove. Maybe taken a lunch break on a white sand beach where there's an ice cream stand and a beachfront brewery. Instead of choosing between epic disaster and a long slog, you could have been munching on a waffle cone and sipping a Guinness. But no, everyone wanted to do something else. No one listened to you then so why should you speak up now. Let them follow the fool into danger if they can't see the better choice is to go around and keep everyone safe.

And lots of folks will keep silent for various reasons. Maybe some share your distaste in the poor choices in front of you. Maybe some are just afraid - afraid of speaking up, afraid both choices will put them at risk, afraid people will think they are afraid. Maybe some really don't know how to evaluate the choices and don't know what's safe and what's not. So while it's natural to want to leave people to suffer for their own failures to make good decisions, at some point you realize what this means. It means Suzy, who brought three different delicious pies to share at the last meeting but can barely keep up with the group at best of times, will suffer, and suffer more if the group doesn't make the better choice now. It means Jim, the retired social worker who just started paddling but once gave you a lift home from a paddle after you lost your car keys, will suffer. As will some people who you don't really know but are probably decent human beings too. That's not really fair or decent.

You have the experience and abilities to know choosing the lesser of two evils means less evil, which is sometimes the best you can hope for. You know you should speak up. You should make the argument for the best course of action and you should do so determinedly and with passion to make sure the group arrives at the best decision. Not for your sake - you'll be fine no matter what - but for the sake of those who could use your help. That's what it means to be a member of a group. You look out for everyone and make the best of even the worst situations. Maybe you do it because it's the right thing to do. Maybe you do it because you've relied on others for help before and you're likely to need it again. Maybe you just do it because you really like Suzy's pie. But if we all help each other we all end up in a better place, because even the best solo paddlers got there with help from others. Paddling is a community (as is the whole world), and we look after our own (everyone). 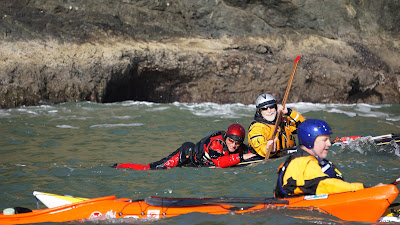