When I moved to the Mendocino Coast a year and a half ago, it brought me closer to the ocean and its wonderful playground. But it took me far from my many paddling friends and co-workers at California Canoe & Kayak. I've managed to get back to some teaching for them here and there, but those days tend to be hectic and my focus is on my students. I was happy when my schedule aligned with the CCK Instructor Training weekend this year - lots of great folks in one place with no students to worry about.

The point of the weekend is great - a chance for all the sea kayak instructors to get together and go over curriculum, for the more experienced instructors to mentor the new, for policies and procedures to be clarified and updated. I had run the trainings in the past, but with Sean Morley taking over responsibilities as the program's director, and lots of other great instructors stepping up to lead sessions, I was invited as a guest and given free reign to have fun. And I got to bring my wife!

On Saturday I joined the group led by Bill Vonnegut, teaching rock gardening and heading out under the Golden Gate Bridge. Tagging along were another couple visiting instructors - Alec and Sharon Bloyd-Peshkin from Chicago. With so many instructors, the session became fairly casual. Bill led us through some stroke work and maneuvering exercises, Alec and I took lots of pictures, then we headed out the gate and explored the coast.

San Francisco Bay is remarkable in the variety of paddling conditions you get on any given day within a mile of launching. Horseshoe cove was protected and flat, a perfect place for the other groups to practice stroke technique. Around the corner was Yellow Bluff, the local tide race, going off at 3.5 knots and creating plenty of turbulence for rough water rescues. And us - we had blowholes, slots, and pourovers while still in site of the city across the water. Everyone was bathed in the common winter sun (regional secret - January is often sunny and calm, June is foggy and cold).

We worked our way down to Kirby Cove for an easy beach landing and lunch. Afterward we launched and paddled around Pt. Diablo, where the ocean swell was starting to reach into the Golden Gate and create some very dynamic water. At low tide, a few of the regular pourovers were too dry, but a tricky slot with a rock in the middle made for the excitement of the day. 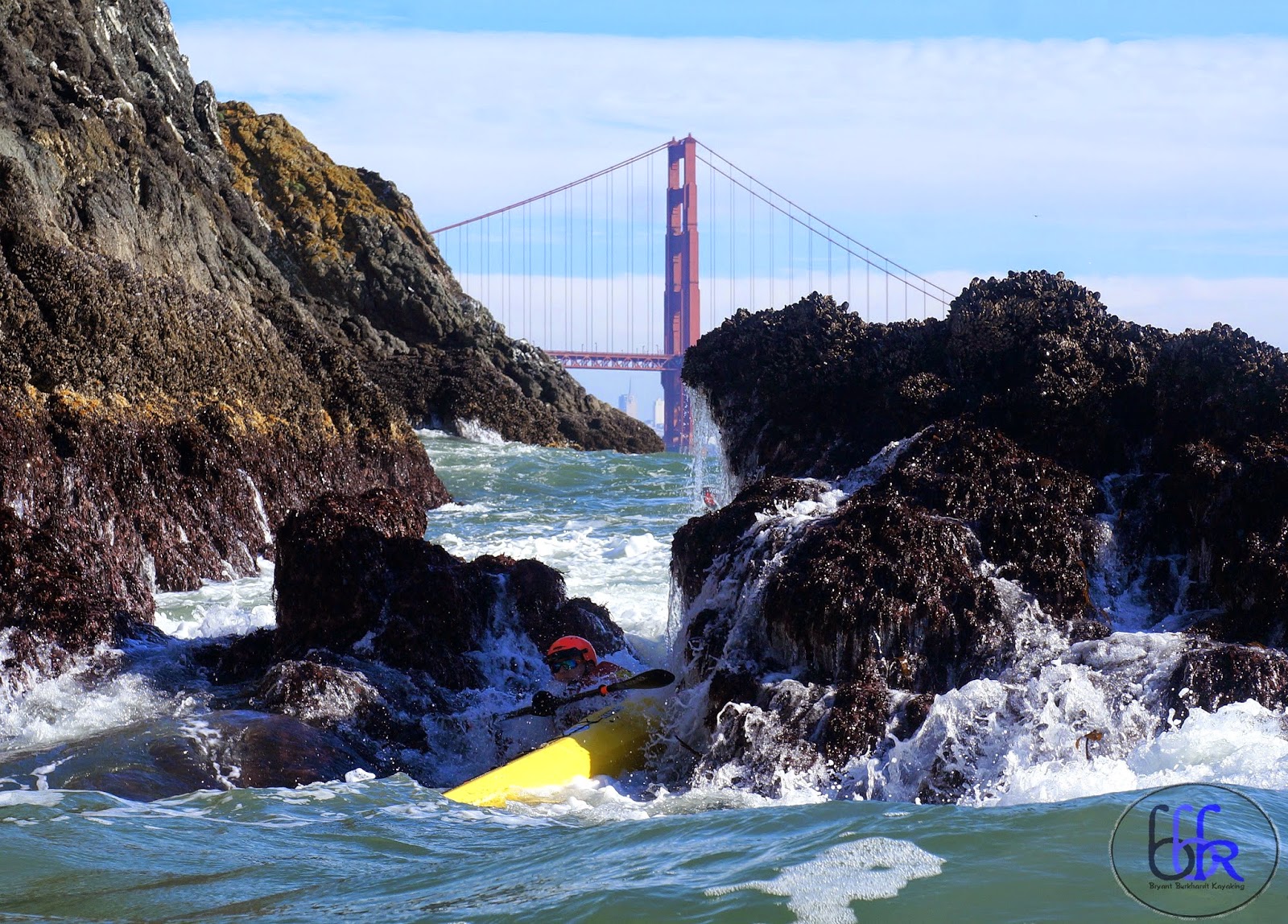 Each set created vastly different currents running between the rocks. Bill glided through easy as cake. I started to follow but got pushed back by a big set and took my time re-positioning. I got a nice ride and made it through without incident. Sean F. came after and lost the water halfway through, dropping down and getting pinched between the middle and outside rocks. He braced off the rock (maybe both rocks - there was a lot of bracing going on) and held on long enough for the next surge to push him free. He came through with a grunt that turned into a large smile when he was safely clear.

Alex lined up to go next and the swells picked up even more. He timed a large wave really well, but none of us expected the reflection off the wall to pin him up against the outside rock. He held on while the wave pushed, but he couldn't go forward or backward and eventually the wave dropped out and he fell into the same pinch as Sean F. Only he wasn't quite as upright. And while he held onto the rock for a valiantly long time, the set had past and no wave came to free him. He ended up exiting from his boat and swimming to freedom - with half a paddle. His shaft had broken sometime during the excitement. Alec himself was fine and soon reunited with his boat and a spare paddle, and since we were at our turnaround point anyway we headed back in.

We made it under the bridge against the ebb, hugging the eddies and sprinting against the strong current at Lime Point. It's always great to watch people discover the power of current and the secrets to avoiding it. Alec challenged me to see how few strokes it would take to get past the current right on the point. I put my whitewater experience to good use and made it in four - I don't like working hard when I'm trying to relax.

The second day was a slightly different affair. While the CCK crew worked on ACA Skills Assessment practice and procedures, Lindsay and I just wanted to paddler, and Alec, Sharon, their friend Chris joined us. The heavy fog made a trip out to Pt. Bonita less appealing, so we decided to head to Angel Island - if we could find it. One of the other dangers of being a guest and borrowing boats is that you don't always have/bring the things you might need - like a compass. Luckily, the current itself serves as a pretty good marker. We skirted the mouth of Richardson Bay and cut across from Tiburon, a grey and featureless paddle that was made fun by the company and spirit.

After another restful lunch, we launched back into the mist, hoping it would eventually clear - we really wanted the out-of-towners to get to see Alcatraz and San Francisco from the water. We rode the ebb this time and pulled out into Yellow Bluff, the largest tide race in the Bay. It was small when we got there but grew a little as we played. It never gives great waves, but it always gives you some action to enjoy. And as we played the fog lifted, at least enough to make out the general features of the land surrounding us. We called it a success and headed in, lingering inside Horseshoe Cove, not wanting to let the weekend end.

But like all things good and bad, eventually it did end. At least, the paddling did. After racking the boats on the trailer and peeling off the drysuits, we all retired to the best kept secret bar in Sausalito - the Travis Marina, right over the cove with an unparalleled view of the bridge. Most of the CCK crew had made it in as well, and a fine afternoon was passed sharing stories, catching up, and hoping for the future.

It's great to live in an amazing kayaking Mecca, and even better to have a life partner who enjoys sharing it with you. But kayaking is a large community, and it's great to know that even if you can't be a part of it every day, or every month, that it's still there for you. I'm so glad I got to see my old friends, feel lucky to have made a few new ones, and I can't wait until the next time.