Is this Heaven? No, it's the Forks of the Kern

What makes a perfect kayak trip? Well, it's a lot of things. It's the paddling, the location, the weather, the people, the food, the stories, the adventure, the difficulties, the laughter, the uncertainty, the water, the sky, and more. But ultimately it's just the joy. The pure and simple of joy of the thing. The Kern is where I learned to boat the rivers. The Forks of the Kern is the best of the river. Doing an overnighter, spending a holiday weekend with old friends and new, celebrating my buddy Matt's birthday - that's what makes the perfect kayak trip.

I don't feel I have a lot more to say about the trip. I'll let the pictures speak for themselves (having a new camera that kicks ass is the cherry on top). 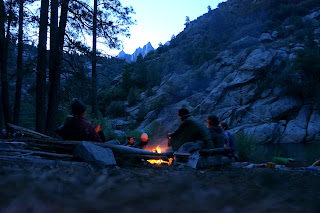 We did a short first day, starting paddling around 4pm and finding this awesome camp site by 6pm. we had a great view of the Needles in the sunlight and a sandy beach to sleep on. Everyone had brought some goodies to share: we started with some wine and cheese, added some wasabi seaweed and colored licorice strings. Dinners ranged from fresh made pepperoni pizza to red pepper and cheese quesadillas. A nice fire and some good whiskey and no one minded the unseasonably cool weather. We woke up for a leisurely morning to start day two and cruised down before hitting the bigger rapids.

After we finished it up, Matt and I had to hit the road back north for work the next day. Our good friends let us rock star without running shuttle and we took advantage by driving up through the Sierras to get a view of the next drainage north: the Tule. An impressively steep river with some great creeking options. Another reminder that, while NorCal has more boaters and feels like the hub of paddling in the state, SoCal has the goods as well. And the boaters down there are gracious hosts. Can't wait to return the favor.

The video may be coming - depends on whether or not my editing software decides to stop crashing. In the meantime, here's a link to the full photo gallery.

UPDATE: video is here, though quality has suffered a little in the complicated rendering process I had to go through to make it work: