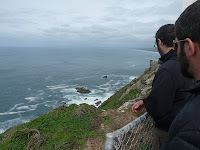 After the Golden Gate Symposium I had a couple days to paddle with my friends Dave and Paul from Alder Creek in Portland. They were planning on taking a few days to work their way back north. So we set out for Pt. Reyes for some rock gardening. But the swells were just too big so we spent the day walking around and taking pictures. It was fun to sit high up on the cliff tops and watch the walls of water roll in and cover up thirty foot tall rocks, sending water shooting over them like it was launched from a water gun. 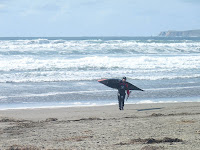 coast. But a call to my friend Jeff revealed that the swells were just as big up there and unfriendly for playing. So we stayed south and tried to get in some surf at Dillon Beach at the mouth of Tomales Bay. With six or seven lines of breakers, the outside ones being well overhead, it was really a fruitless effort to get out far enough to catch a ride in. So we just took turns getting smacked by the walls of foam coming in and decided to call that fun.

More pictures HERE and video below: