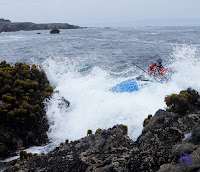 One of the dangers of living on such a beautiful coast is that you start to take it for granted. It's easy to sit at work watching waves crash over the rocks and think that it's nice but feel no urgency to rush out and experience it directly. That's why it's nice when people travel for hours to get here and spend several days paddling, super excited about being on the coast and blown away by the water and environment that we have. Their enthusiasm rubs off and it's a good excuse to rinse the dust off the boat and get out there.

This last weekend a big group (fifteen) showed up to play in the rock gardens. Busy with work, Lindsay and I could only join them for one day. They were camping at Russian Gulch and had paddled out of there a few times. They wanted to try somewhere new and suggested launching out of Caspar. I've paddled out of there a bunch, often to surf or do a quick lap around the harbor. I've thoroughly explored the stretch heading south down to Russian Gulch, but I've never gone north in conditions small enough to play in the many rocks that are there. We had a good forecast and decided to check it out.

I have to say it really impressed me. It's not easy to stand out in Mendocino, where every place you look has stunning vistas and the shoreline is filled with caves, tunnels, and intricate rock gardens. But Caspar North was pretty remarkable. It's definitely more exposed and on a typical day it would probably be too scary to do much playing. But in 3-4' swell it's a blast! 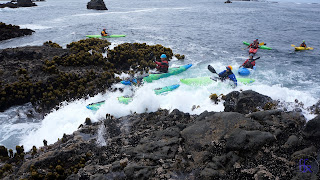 We had pour-overs galore and a number of really fun slots. We found some technical sections that were quite challenging on the bigger sets but also lots of forgiving features that could handle the silliness of the group. There was even a little cove with some surf waves - as long as you could dodge the rocks at the end.

And getting to enjoy it all with old friends, and to make new ones as well, was a huge bonus. Afterwards we were treated to a bountiful dinner at the campground, happy to contribute some fresh caught abalone that Lindsay got the day before. On the one hand, it felt a little silly to see everyone sitting in camp chairs, laptops out as  they reviewed pictures and video from the day. But seeing someone smile as they watched themselves go big, maybe the first time they really ran a large pour-over in this remarkable setting - you can't help but feel good at that.

The other drawback of being busy working and writing about paddling instead of doing it: I'm out of shape. After a full day of paddling and playing in my Jive, which really needs some attention to the backband, is that my back totally locked up the next day and I hobbled around the house like I'm twice my age. But I did manage to update my website to get ready for my book launch. A Paddler's Journey will be out soon and hopefully I'll get back to creating new adventures instead of merely recounting them.

More pictures from the day are at my Picasa Page.