The Mendocino coast is known for its dynamic water. Miles of rock gardens filled with pourovers and slots, surf breaks around every corner, and lots of large swell to fill it all up. But every once in a while the swells go away. We're left with nearly flat ocean conditions. And when it's also sunny and calm, you need to take advantage of it.

This past weekend we had short period swells under three feet. That translated to less than a foot of surf in on some of the beaches. So it was time to explore places you can't normally get to, and time for even the timid to start playing around the rocks.

On Saturday we went to Russian Gulch with a group of friends from the Sacramento Sea Kayakers. Most people were in short boats - some for the first time - and we got the chance to play around the outer rocks. Heading north towards Caspar is a series of tunnels and arches that allow you to explore while being protected from the swells. That protection comes from a line of outside rocks and take the energy of the day. Since this day had such little wave energy, we could actually explore the outside rocks, going wherever we wanted. 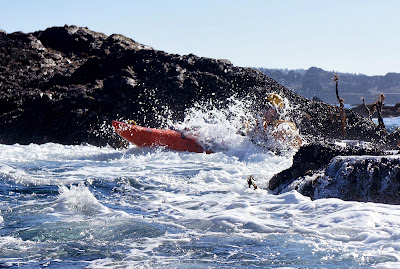 We still found some nice pourovers and slots. The occasional bigger set would come through and give everyone a little ride and excitement, but it was always gentle and forgiving. I was even able to climb out on the rocks to get some closeup shots.We didn't go very far, but it was a lot of fun.

The next day we went further south. We left the short boats and took our sea kayaks to Navarro. The beach  is steep and dumpy, but with one foot waves it was an easy launch. After Cate dropped some crab pots we headed down towards the town of Elk, playing in every nook and cranny along the way.

And there were lots of nooks to explore. Lots of tunnels that went through to secret lagoons, lots of caves that disappeared in darkness, and more rocks to paddle around then we had time for. There were multiple rocks with multiple arches and again, plenty of sunshine to see it by. The visibility in the water was just as good, and almost the whole time we got to watch the garden of the sea pass under us as we made our way along the coast. It's a beautiful stretch and normally requires a lot of work to reach, but this day was a walk in the park. 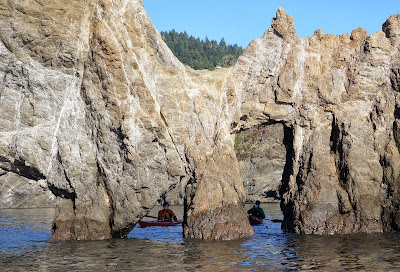 We finished the weekend with some fresh caught abalone (thanks, love!) and lots of gear cleanup. I'm sure we'll be getting more winter storms soon, and we'll enjoy the surf and excitement that comes with them. But it will be nice to hold the memory of a warm, flat weekend and the special places along the coast that are seldom visited.

More pictures of Russian Gulch HERE. Navarro to Elk HERE. And finally, after some delay, here's the video of the trip from Navarro to Elk: