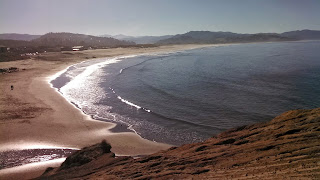 Once again, the Lumpy Waters Sea Kayak Symposium put on by Alder Creek was an incredible event and tons of fun. You never quite know what you're going to get for weather in mid October on the Oregon coast, but this year was better than anyone could have imagined. Last year had rain, wind, big swell, and cold temperatures (read about it HERE). This year was sunny and warm, mostly light breezes and small swells. Perfect teaching conditions.

This was also the first year that I ended up teaching what I was assigned. There were the usual changes - students switching classes, class offerings changing to suit the conditions, instructors moving around to cover things - but I somehow escaped all that. It was nice to be able to follow through on my game plan for once.

On Friday I taught an edging and bracing class with Rob Yates. With the smallest swells of the weekend, we  were able to get right into the surf zone and have the students practice the skills in the environment where they'll need them. Rob had folks working without paddles and the instructors took turns standing chest deep in the cold water while the students practiced going in and out and doing some side surfing. Everyone was nervous at first but by the end they felt almost more comfortable bracing without a paddle than with it. Lots of smiles all around.

On Saturday I taught a rescue class and then an intro surf zone class. We didn't really have much rough water for the rescues but the plentiful sunshine allowed for lots of in water practice and people came away with some new ideas and a couple a-ha moments. The surf zone was great with more swimming and playing out of the boats to get used to the waves. The students got in their boats while once again the instructors stayed in the water to assist. Everyone did a great job at holding position and going in and out of the surf. Everyone also had a good wipeout while trying to surf - good to learn how to handle that early on since crashing is a big part of surfing. 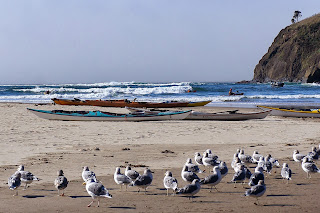 On Sunday I got to stay in my boat for an Intro to Rock Garden Safety class. Some students were tuckered out from the previous two days and called it a weekend early, so we ended up with almost as many instructors as students and divided up into two groups. We paddled out of the Salmon River mouth to play at Cascade Head - truly one of the most beautiful spots on a very beautiful coast. We had to get through some breaking waves on a sand bar and my pod made it fine. Several other classes did as well. But the other group of Intro students had the misfortune of hitting the biggest set of the day. A boat on boat collision led to some carnage and a number of swimmers. Everyone was okay and they regrouped on shore and decided to stay inside. My gang got to work around the arches and explore a deep cave before heading back in on a higher tide that created gentler surf. We stopped at the beach for a well deserved break before the flat paddle back to the launch.

I enjoy teaching at these symposiums but another reason I love to go is to catch up with friends. It was great to see my Pacific Northwest friends like Paul Kuthe, Matt Nelson, Shawna and Leon, and others. I even got to catch up with some of my California friends who are a little farther away now that I live in Fort Bragg. It even seemed like I needed to catch up with my neighbors Jeff and Cate since they've been working so much lately we haven't had time to go out and play. It all went by too quickly but I know we'll do it again next year (Oct 10-12, 2014). In the meantime, it's time to start thinking about the Golden Gate Sea Kayak Symposium in January.