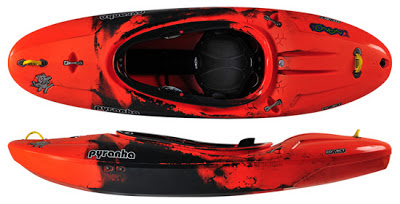 Since it's a short boat I thought I'd give it a short review (actually, I only paddled it one day on class III so I don't know enough for anything more comprehensive). The Pyranha Nano is a creek/play combination. That's not an easy combination and it's not a boat for everyone. Where I think this boat shines is for class V paddlers who want to play their way down easy class V runs - that's a small niche.   (video of the Pyranha pros doing just that can be seen here). This boat is a reincarnation of the Ammo (though Pyranha doesn't seem to want to associate the two boats together). The Ammo didn't win over many folks, but I used it a lot to teach out of and liked it for certain things. So I'm going to compare the two boats.

The Nano feels short. It turns quickly - spins on its flat hull. But it's got a lot of volume in both the front and the back. The planing hull surfs rather nicely and it cuts back so much easier than a longer river runner. But the weight of the boat (more creekboat-like) slows it down - it's not a playboat on the wave - just a nice surfing river runner.

The Ammo had a sharp edge that was fun to carve with - for some reason that Nano edge seems a little harder to engage. This turned out to be a good thing since it made the edges much more forgiving - combined with the volume it gave the Nano a solid stability that felt like a creek boat. The Nano was quick and fit into tiny eddies but handled the waves and funky current like a big boy.

The Ammo was also slow. The Nano is surprisingly fast for it's length. It's not as fast as an eight foot creeker, but it's got some speed to it. It also boofs like a champ! The speed, short stern, and just enough rocker allow it to launch off rocks. Couldn't do that so easily in the Ammo. 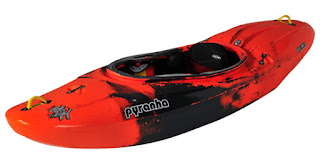 In the end I had a really fun day in the Nano. It's a similar concept to the Ammo but a completely different design. It seems to have improved a lot of the issues with the Ammo while keeping all the fun. Is it the right boat for you? If it is you'll know it. I think it would be great for certain runs but I wouldn't feel comfortable taking it down something that I thought was challenging. And if I was on something easy and wanted to playboat I'd take a playboat. Every time someone tries to come out with the 'one and only' boat you need I always think it ends up being the perfect third boat. But it is nice to see Pyranha doing something a little different and doing it very well.