Paddling clubs are a great way for new paddlers to meet other paddlers. They're also a great way to socialize; to share knowledge; to learn about new areas; and to get out paddling more. The thing is, most areas only have one paddling club. So once you know everyone in the club you can end up jones'n for something new. That's where other clubs come in.

Explore North Coast is a club on the (appropriate) north coast of California and they had the brilliant idea of inviting other clubs to come visit for a multi-club get together. This was the fourth annual event but the first time I've made it. In addition to the many locals who were there, quite a few folks from the San Francisco Bay and Redding areas made the drive as well. All told about forty people attended the paddles and evening dinners. 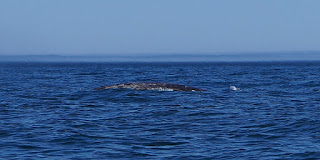 Trinidad Head was the basis for the paddling but my first day was spent north at Crescent City. Normally there's better surf up there but it was pretty small when we arrived. Some took short boats out to play but most of us went around the jetty to paddle through the rocks on the north side. The highlight was a pair of whales that were hanging just off the jetting, popping up every minute or two as if they had no place in particular to go. It's always cool to see such large creatures up close in your little kayak. 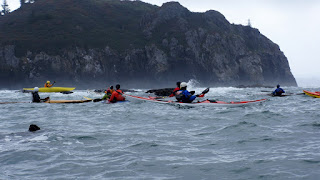 The next day most everyone launched from Trinidad, some into the surf on the outside and some on the protected beach on the inside. We all met up but soon split into smaller groups depending on the objective. Our group ended up going just a little ways to College Cove. We found a couple play features but mostly we were looking for surf. We found some nice small waves that gave us some lengthy rides before ending up on the rocks - luckily they were small enough to pull off before you ended up in the rocks.

The weekend was a great combination of casual events. Whether you were a new paddler just getting introduced to the ocean or an experienced rock gardening looking for new waters to explore, the Trinidad area has everything you could want. And not surprisingly, the locals are warm and friendly and arranged for the best weather for their guests - we had an all time record high of 88 deg. on Saturday!

Enjoy some nice pictures while I edit the video: Picasa photos.