Just back from the Lumpy Waters Symposium put on by Alder Creek up in Oregon. Each year it's the highlight of my fall and each year it keeps getting better.

In the past we've lucked out with nice weather, but this year the forecast was miserable. It wasn't as bad as expected, but that just meant not as much rain or wind. We did see snow on the ground one morning. In spite of that, everything seemed to go smoothly, changing venues and switching up classes to make everything work. The participants also seemed to take it in stride, charging into challenging surf or doing some rock gardening inside of the harbor. Everyone just wanted to learn and have a good time and that's what we did.

As always, my class assignment got changed at the last minute, but this time I was more than happy about it. I got to teach a class with Leon Somme of Body Boat Blade. I've been seeing him at these things for years but we've never had the chance to teach together. Not only is Leon a great instructor, but I knew our personalities would just work well as a team. The students weren't the only ones disappointed that we had to end class to get back in time for dinner.

These events are always a great chance to meet up with old friends, both instructors and students. It was great to see Matt and Nick who were up at Okisollo with Sean and I, it was great to see Kim who's recovering from a shoulder dislocation but out paddling again, Bob, Rob and Alex working the event, Paul running around trying to organize of all us, Dave and Suzi overseeing it all (well, Suzi handling the details and Dave doing whatever she says). It's really like a family reunion but with lots of fun paddling. 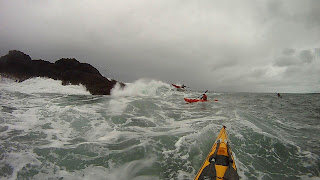 Of course, the funnest paddling is saved for the day after the event. That's when a dozen of the coaches hang around for some serious play. We headed out to Three Arch Rocks off Oceanside yet again. This year the swell was smaller than last (pictures here), but larger than the first. It was a little too big to get into everything (I watched a fifteen foot face slide inches past my face as I was testing the rocks), but not large enough to create the massive surf we caught last year. It was still fun playing in the arches, bouncing off each other, and watching some acrobatic rides into the beach. Mostly it was just fun to be with such good people.

With the busy schedule, the rain and wind, a poorly functioning GoPro unit, and no waterproof case for my Nex-5, I didn't get a lot of pictures or video. But here's a little something from our play day: