I really haven't missed the paddling that I haven't been doing this summer. But I just spent a weekend up on the river doing some teaching and paddling with friends and I realized that I have missed the people. Paddling is a small sport, and as such creates a special community. We recognize each other (or at least each other's boats) just from seeing the same people in the same place. We may have absolutely nothing else in common besides paddling, but that's enough. 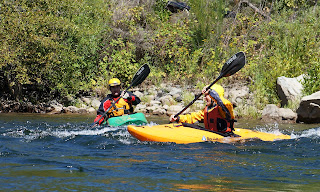 I paddled class II whitewater all weekend. First with my friend and his fiancee. She was warming up for a couple of days of class III and wanted to work on her roll. She hit every single one - even the three I made her do at the end of the day. Then we had some pizza a beer before crashing in the back yard of a local friend. Doesn't get an simpler and any better.

The next two days I was teaching a beginner class. One student was the son of a former student; one was the wife of a former student. On the river I ran into another half dozen former students and more paddlers I know, from fellow teachers to folks just out enjoying a holiday weekend. Everywhere you turned it was warm smiles and friendly hellos. In the evening we had a farewell dinner with a British girl off to Africa for the season, talking about grad school, wedding plans, and beat downs.

It's really the time off the river that makes whitewater kayaking so special. It's getting away from everything else and spending a few days immersed in a different culture, a friendlier, better culture. It's just the joy of being one of the river folk.