There's a difference between someone who paddles and a kayaker. Someone who paddles rents a boat and goes out on the lake for a couple hours for fun. They buy a boat at Costco to take out when the grandkids visit. They use 'oars' to slowly float down the river. A kayaker is someone who is enthusiastic and dedicated to the sport. 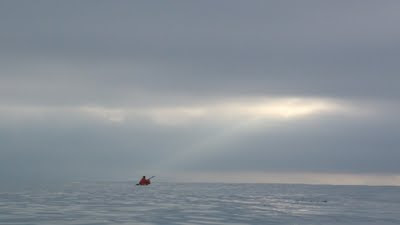 Don't get me wrong - people who paddle are great. I love to see the family taking a canoe out for a day of fun; the vacationers trying out a pedal drive boat for a couple hours; even some kids riding rec boats in through the small surf on a nice sandy beach. But I'm in the business of creating kayakers. When I go paddling that's who I want to paddle with. I want to sit around the campfire and talk paddling with those who want to understand what it means to kayak. Kayakers are a separate group from the general population and we share a connection that you don't get from just going out for a paddle now and then. 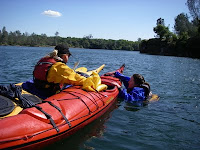 So what exactly makes someone a kayaker? That can be hard to define but the other night I was working with some ladies on sea kayak rescues and was struck by the thought that rescue practice is a defining activity. Real kayakers, whether flat water or ocean, learn and practice their rescues. That shows an understanding and commitment to the sport. Without rescue skills you are either confined to benign environments or you are a risk to yourself and others. You don't have to know how to roll, you don't have to be able to do a paddle-float rescue in under 30 seconds. You just have to be aware enough to know that you need to learn some way to get back in your boat and you need to try to get better at doing so. 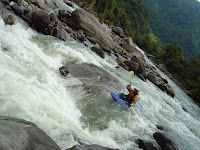 On the river it's a little different. Whitewater has a convenient rating system. But you don't need to paddle class III (or IV or V) to be a kayaker. And again you don't need to have any specific rescue skill (rolls are good but I don't think they define you). For me, what makes you a kayaker on the river is the ability to lead a rapid. To be out in front and find your own way down, whether an easy class II or challenging class IV. You don't have to lead every rapid - we all follow people at times. But to take the personal responsibility to scout and rapid and find your own line is what kayaking is about. Those who can only follow others down the river are really just out for a paddle.