Lost Coast - off the couch

Sometimes you plan out your big trips:  research the charts, search out local knowledge, follow the weather patterns, open the schedule to go when conditions permit, train your body and mind to be ready to handle the worst. And sometimes you pick a date, jump up off the couch and just go. And get lucky. 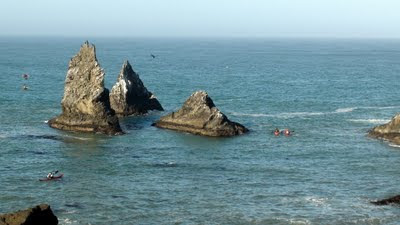 Four of us CCK instructors (Sean, Matt, Anders and myself) picked a date to paddle the Lost Coast and came up with a general plan. Sean instigated the trip and came up with the starting and finishing points (and the necessary back-country permit); Anders did the chart work and sent out emails to get any advice we could. I myself just looked over the route on Google Earth but didn't do much to physically prepare - I paid for that with some tendonitis issues but nothing terrible. The plan was to put in outside Ferndale, paddle 75 miles down a remote and exposed coastline, and get out back at Highway 1 just north of Ft. Bragg. We all took plastic boats ready to play in the rocks as time allowed. We knew we had some protected landing options but an exposed launch to start and possibly again at the end. We all had a four day window between wives and work to squeeze it in without running into major problems in our real lives. It seemed do-able but certainly not a given.

But it all turned out well. Small swells on the first day allowed an easy start. The winds were generally light or at our back. We found some rocks to play in and generally we had long days of paddling (8 hours/day) with sunny skies. We had some nice campsites, generally shared with hikers or surfers, some lonely lunch spots with stunning scenery, and lots of good times with good friends. The last day had some of the best caves and tunnels to play in, which kept us busy in the morning. The afternoon found strong headwinds and growing swells which led to a couple guys getting out a little earlier while the other two of us continued on to paddle down to the truck and then retrieve the others on our way back north to get my vehicle from the put in. The swells had grown but our takeout site, a random alternate from where we had originally planned, turned out to have more protection than expected and the landings went smooth.

All in all it was a great trip with very minor issues (a flooded hatch, a lost spare paddle, missing sunglasses). It is a beautiful stretch of coast that transitions from big off shore rocks (like Trinidad) to a maze of tunnels and slots (like Mendocino). Sean's much more complete writeup is HERE. Anders is working on putting together the video that we all shot so hopefully that will have some good stuff - but it may take a while. A quick edit of my video is below. And here's a link to the rest of my pictures from the trip.