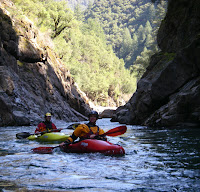 So with the whitewater season kicking off, and kicking off in a big way, one question that often comes up is 'how do I know when I'm ready to step it up?'.  And that goes along with the specific 'am I ready to run river X at flow Y?'.  Neither has a real easy answer but the general rule of thumb is based on what rivers you have done in the past compared to what you are looking at now.  'If you've done river Q at flow R then you're ready for river G at flow H'.  These river lists are always arbitrary and often create heated debate that is quite meaningless unless everyone involved has paddled the same rivers.  So I'll avoid that altogether.  (but if you're interested in such a list for Cali then it's already been compiled and explained quite nicely by Darin McQuoid )

I will step back a level and address an often unasked question: 'why do you want to step it up'.  I think that the motivation often determines the readiness.  If you want to tackle harder runs because you enjoy the challenge, you have learned as much as you can on the runs you do, and you're comfortable accepting more risk, then go for it.  If you're trying to keep up with someone else, if you think that difficulty is what paddling is about, if you want to be able to boast about what runs you have done, then you're much safer staying put.  Basically if the motivation is intrinsic then most things will take care of themselves - you'll know when you're ready, you'll be excited to try a new river, you won't need to be talked into or reassured you are ready for the next step.  But if the driving force is external, that is where people get themselves into trouble.  And yes, even if it is external forces driving you forward it is only you that is to blame for being beyond your skill level - that's called personal responsibility.

On a less philosophical level, the age old adage is that you first step up your level on a river at a lower level.  You make class III moves on a class II rapid, you boof the ledge hole on the class IV instead of avoiding it.  You increase the difficulty while maintaining the (hopefully lesser) consequences.  You are ready to move up not when you can just survive a run, but when you can style it.  And if you can't figure out how to make a run a class more difficult than it is normally rated then you are definitely NOT ready to move up. 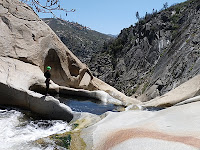 Some people boat for the sheer adrenaline rush and want the element of danger.  That aggressiveness will eventually catch up with them and put them (and their buddies) in a bad spot.  But that is not what kayaking is really about.  There are many ways to do foolish and dangerous things - just check out YouTube - so the means of accomplishing stupidity is irrelevant.  For true paddlers there is a beauty to the sport that is unique to boating - the great places we get to go, the feel of properly executing technique to carry ourselves down the river with grace, a connection to the water - not a battle against it. Let your river sense be your guide and only step it up when you know you want to.