the river levels rise!  Unfortunately we've had a little too much rain recently and most of the rivers are a little too high.  And with only a couple days off this week with a bunch of other stuff to take care off I wasn't interested in doing a full day of big water paddling and lots of driving.  So I rounded up a couple other locals and we headed to the lower American river right here in town.  It's dam controlled but they've been releasing huge amounts to make room in the lakes above for the huge amounts of rain water coming in to them.  Normally the lower runs between 1,000 and 5,000 cfs throughout the year.  Today it was at 21,000 cfs (we just missed 31,000 by a couple days...). 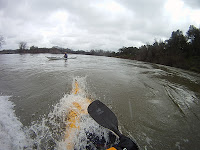 We took our sea kayaks since this isn't really a whitewater river.  Normally it's fairly flat with a couple class I rapids.  Today there were  several nice class II waves and lots of swirly water.  The only problem is that with the water moving so swiftly there was little opportunity to get back to any of the fun waves once you washed off.  But it still made for a fun and quick trip and it's always interesting to see rivers at different levels.  Here are a few more pictures from the day.